Home Transportation Three Water Mains Broke While You Were Sleeping 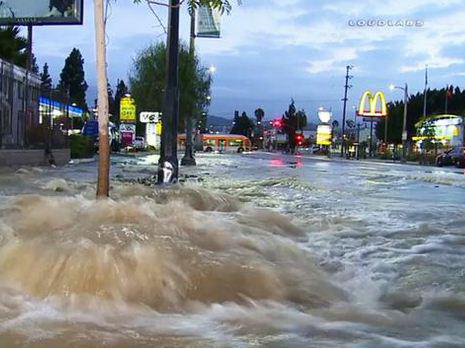 It’s as if L.A.’s crumbling water mains have unionized. A year after a pipe burst near UCLA, flooding the campus, and five months since another soaked an area of Hollywood—not to mention several other breakdowns in between—not one but three water mains cracked open before the sun came up on Thursday.

A second pipe—a 36-inch main in Lakeview Terrace—ruptured around 3:50 a.m., flooding the street near the intersection of Paxton Street and Foothill Boulevard and damaging the surface of the road.

A third and even more serious break occurred along Vermont Avenue between Clinton Street and Melrose Avenue. A 12-inch main ruptured around 5:00 a.m., flooding underground parking garages and trapping some residents of nearby apartments inside, according to Eyewitness News.

Most of the city’s water mains, many of which were installed in the 1920s and ‘30s, are cast iron, and the process of fixing and maintaining the pipes is formidable.

Check Out the WeHo Water Main Break Mucking Up Your Commute