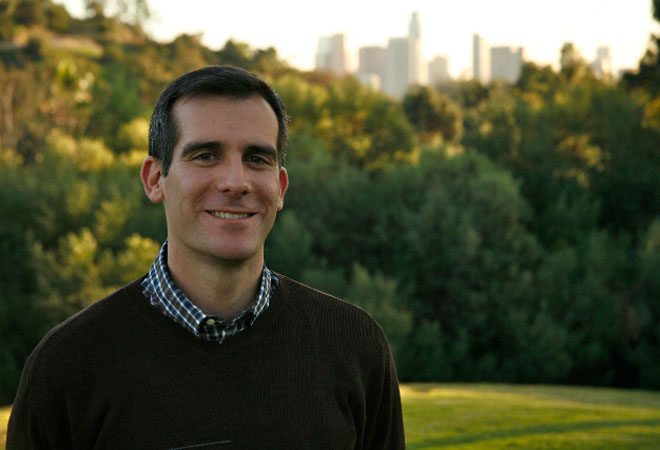 Fingrs crossed that our mayor-elect brings dancing shoes to his Inauguration this Sunday.

Los Angeles mayor-elect Eric Garcetti will be sworn in to office this weekend in a public ceremony on Spring Street. Here are three reasons (not counting the benefits of civic engagement) to attend:

1. You don’t have to call in sick to work.
Eschewing the traditional July 1 inauguration date, Garcetti is being sworn in on a Sunday (June 30), so you don’t have to think up a fake-but-believable illness to get out of work for the event. Better yet, the ceremony starts at 6:00 p.m. and is expected to end around 9:30. Not only will you avoid sunburn, but you won’t have a late night hangover in the morning. Double win.

2. You can leave your tux (and credit card) at home.
Forget $500 tickets to a black-tie gala. You don’t even need to strive for “Sunday Best.” Instead, dress “block party casual” and prepare your palette for the legion of food trucks that will line Grand Park, where a party will be held. Other than the hot dogs you will inevitably buy, the event is free!

3. You don’t have to pay for the Inaugural soundtrack.
Since there won’t be a public procession this year, you can put your feet up and enjoy live music from scheduled performers like Moby. (Garcetti’s transition staff leaked that three or four other acts will be there too). Will Garcetti show off his break-dancing skills? You won’t know if you don’t show.

L.A.’s Next Big City Election Is Less Than a Year Away. Here’s What You Need to Know Now