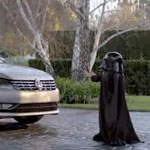 You’re the head of production for The Mill. Tell me about what you do.
Our company specializes in special effects on any kind of moving image. It could be something like a traditional commercial or it could be displays in a store, it could be elements for an app—anything with a moving image.

For an average commercial, how long does that process typically take?
We tend to get involved once a script is approved and we work with the agency, the director, and the production design to figure out the best ways to shoot things. Once it’s filmed and edited then we generally have anywhere from one week to three months, depending on how complex the project is.

Is the process different for a Super Bowl spot?
A handful of jobs with large-scale special effects come in early, but there is a lot of stuff that comes in super last minute. Some of the commercials we are working on were literally just shot and need to go out tomorrow night. It’s pretty crazy until the very end.

How many Super Bowl commercials are you working on right now?
Ten to 12. It’s hard to pin down exactly because some agencies will work on multiple spots and then the client decides last minute how many to actually run. If we work on two spots for one client two could run, one could run, or none.

Is it frustrating when a commercial you’ve worked on doesn’t air during the game?
It depends on when you find out. So much energy goes into these spots. We turn every room we have in this place into an extra bay to accommodate as much work as possible—we’re all working at level ten. When you find out before the game that an ad isn’t going to run it can be deflating. But I’ve also watched the game before and realized after, Hey wait, I didn’t see that spot. That’s weird.

Which companies are you working with this year?
Well we have a long history working with Audi. We worked on Coca Cola, VW, and Mercedes. I think those are the only ones I can talk about right now.

Do you have a favorite commercial from that group?
I love VW’s “Get Happy” ad. It’s pretty funny, and that was a fun one because we work with the agency [that worked on it] all the time. It’s fun when you have a crew of people that you trust and know.

Do you feel extra pressure when you’re working on a commercial intended for the Super Bowl?
What’s different from other projects is the deadline just isn’t going to move. And there are big financial repercussions for delivering materials late, so that causes more pressure.

So when do you get to relax, before or after the game?
After the game, once I see who won USA Today’s commercial poll.

Who are you rooting for?
In the game? Go Ravens.

Super Bowl Halftime Show Proves Nobody Has Forgotten About Dre