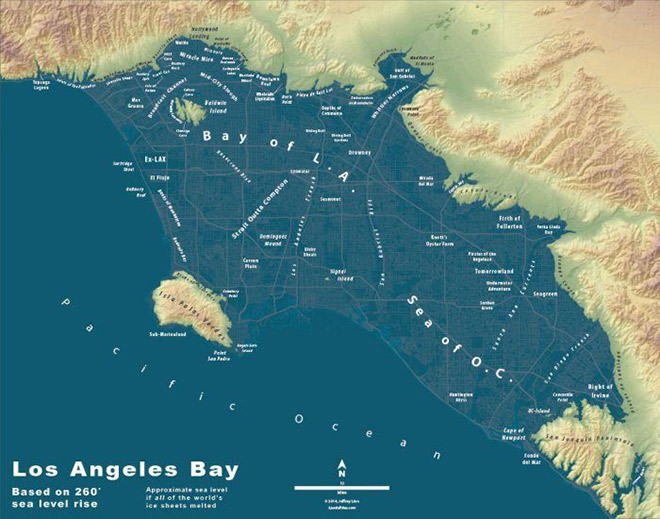 Not to depress you or anything, but according to the USGS, the earth’s climate has warmed by about 1.8 degrees Fahrenheit over the past 100 years. A direct result of the atmospheric microwave known as the Green House Effect is a corresponding rise in sea level (due to a slow melting of glaciers and ice sheets), which has remained steady at approximately one to two millimeters per year. Should all of those ice sheets melt, the sea could rise by an astounding 80 meters, or about 265 feet. What does that mean for Los Angeles?

It means you better learn how to swim.

The information put forth by the USGS inspired University of Washington campus planner Jeffrey Linn to dream up a map depicting a flooded Southern California (henceforward the “Bay of L.A.”) Linn, who posted the image on his site Spatialities, says about the map, “I render an ocean rise that I think is the most visually interesting. I am not portraying any sea level rise higher than what is possible.” We got in touch with Richard Z. Poore, one of the geologists behind the USGS’s findings, to see just how plausible a scenario Linn’s map is.

“Is it likely that all of the ice on the earth would melt? That probably is a stretch,” Poore says. “It is a possibility, but there are a lot of caveats you have to worry about. There are things we don’t completely understand.” And forget about hammering down a concrete timeline for our potential destruction. “You’d have to ask God about that one,” he says.

Realistic or not, the map almost makes the apocalypse seem fun. It even comes complete with whimsical, clever names for our sunken city of the future, including the Korean Peninsula, the Miracle Mire, the Strait Outta Compton, and Downtown Reef. If Linn is using humor as some sort of coping mechanism, it’s working—for now.

This article has been updated to reflect accurate research.

Fault-y Logic: The Chance of an 8.0 Quake Hitting California Reaches a New Highpoint

The Fault in Our Skyscrapers