Home Uncategorized This Day in LA: The (Almost) Great LA Library Fire of ’86 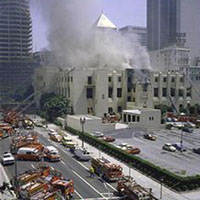 Share
Email
Facebook
Twitter
Pinterest
ReddIt
25 years ago, one of L.A.’s most cherished landmarks went up in flames. Well, almost. Here’s the story of how the city’s biggest library was saved by the quick thinking of the city’s bravest.
In 1986, downtown’s Central Library was a veritable tinderbox. Originally built in 1926 (at the height of America’s “King Tut” craze) the Egyptian-themed building had seen numerous renovations over the years. The main stacks were tightly packed, in some places from floor to ceiling, with layers of highly combustible books. On April 29th, around 11 a.m., smoke alarms sounded throughout the building.
By 11:30 firefighters had arrived on the scene to find a rapidly spreading blaze that threatened to engulf the building. Due to the cramped architecture of the library, as well as the valuable artifacts housed within the building’s lower levels, the fire proved to be unusually challenging. Luckily, by 3 p.m. the blaze had been extinguished by the responding emergency units which included 60 fire fighting companies, one arson unit, nine paramedic rescue ambulances, three helicopters, four salvage companies, one squad, two emergency air units, a heavy utility company, and more than 40 staff and support personnel.
When the smoke had finally cleared, over 400,000 volumes, or 20 percent of the library’s holdings, had been destroyed. Thousands more had significant water and smoke damage. A federal investigation concluded that the fire was set intentionally, though no suspects were ever charged. The bright side, of course, was that most of the library was saved. Considering how the L.A. City Fire Department Chief Engineer predicted “it would be a complete loss if a fire of this type ever occurred,” before the blaze broke out, the LAFD won the day for book-lovers everywhere.
Read the full account of the fire from the Los Angeles Fire Department Historical Society here