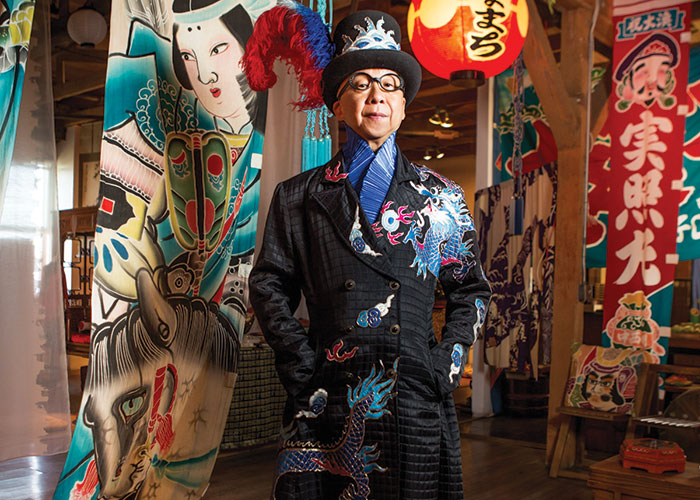 Behind a door at the top of a narrow staircase in a downtown warehouse, you’ll find what Peter Lai calls “the Japanese Cultural Village,” a 5,000-square-foot collection of kimonos and trinkets, dolls and masks, that he’s been amassing for decades. It’s a Tiny Tokyo on the edge of Little Tokyo.

Light floods in from windows along the ceiling, flowing over the rich reds of silk tapestries and lacquer ornaments. Lai (pronounced “lie”) has divided the space into a series of open-air stores, each with a different theme and a corresponding craft. While one might be filled with Japanese dolls, another might feature porcelain or novelties like paper parasols, “Lucky Cats,” fans, and chopsticks. The spaces are so meticulously arranged, they almost feel like art installations in which many pieces are for sale (by appointment). The Village doubles as an event space, complete with a secluded temple where one or two people can reflect in the dimly lit alcove guarded by flowers and a happy panda figurine. There’s a tea garden, dining area, and Kabuki theater as well.

Lai’s fascination with Japan began when, at 18, he traveled there on vacation from his native Hong Kong. “I fell in love with everything in Japan—the food, the new fashion, the old fashion, the new techniques, the old, traditional techniques,” says Lai, wearing stylish red-framed glasses, a white Kabuki robe, and a sheer Japanese patterned shirt.

He planned to study and live in Japan, but his father’s unexpected death kept Lai in Hong Kong to work in the family business, designing costumes for television, opera, and theater. A decade later he moved to L.A., studied fashion at Otis, then opened a boutique on Melrose before relocating to San Marino. He spent the next 30 years there, producing and sourcing materials for designs that blend traditional Chinese and Japanese elements with an exaggerated yet modern touch. (Think: a slinky corset fashioned out of vintage kimonos.) It’s a look that drew celebrities like Kirstie Alley and Whoopi Goldberg. A photo of Elton John arm in arm with Lai, clad in a red-and-gold dress with a white headdress, greets visitors near the entrance of the Village.

Lai signed the lease for the space three years ago as he was preparing to close the San Marino boutique. Moving his stock in the July heat, without the aid of an elevator, he lost 15 pounds. A year went by as the framework that helps divide the interior beneath a vaulted wood ceiling was constructed. The enveloping effect is on full display in a short film about the space that aired last spring at the Los Angeles Asian Pacific Film Festival. Cloaked in a beaded blazer accessorized with a rubber lizard for the event, Lai looked every bit the star.

That outfit, along with others left over from his boutique, is available for purchase in the racks hidden behind the Village’s curtain border. “I don’t expect I make money here. I never thought of it that way,” says Lai. “The main purpose of this place was for me.”

UPDATE: Saturday’s DTLA Explosion Is the Subject of a ‘Significant’ Arson Investigation

The Faces and Fashion of Frieze 2020