Home Politics They Paved Paradise and Put Up a…Parklet? 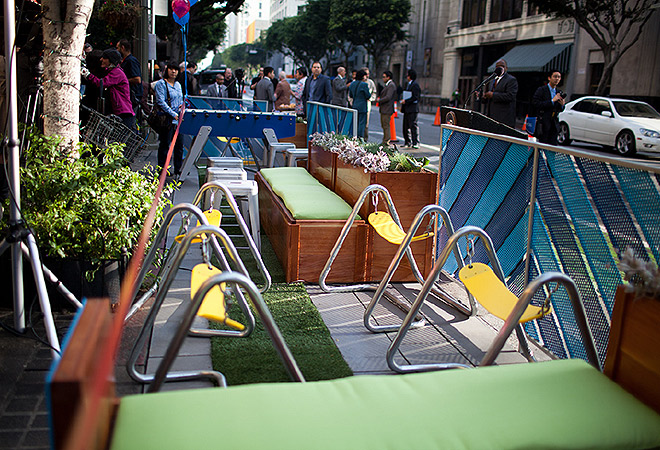 This morning, getting real in the Whole Foods parking lot became the least of our worries—it’s about to get real all over the city.

According to the Los Angeles Daily News, People St, an arm of the LADOT, will launch a community transformation program today that will “turn some of the city’s ubiquitous parking spaces into parklets, plazas and bike corrals.” (Would we call L.A.’s parking space situation “ubiquitous”? Questionable.)

Don’t get us wrong; we love green spaces. We’re just not sure how we feel about these pop-up parklets potentially making the grueling parking process more difficult. But People St’s goal is not to frustrate; rather, they hope to alleviate: per their website, the goal is to calm traffic in certain areas by creating a more biker- and pedestrian-friendly environment. Sounds idyllic, albeit unrealistic—though Eric Garcetti would argue otherwise.

The mayor fully supports the endeavor as part of his Great Streets program, which seeks to upgrade certain intersections across the city. In fact, one nifty aspect of the People St program is that citizens will be able to nominate specific parking spaces or areas to be revamped. “Fundamental to People St is its bottom-up, community-based approach,” the mayor said in a statement. “I am proud of our city’s transportation and planning experts, but no one knows more about our neighborhoods than you.”

The program, which works in conjunction with the LADOT and the LAPD, soft-launched in February 2011 with an inaugural bike corral on York Boulevard. Since then, the Sunset Triangle Plaza and four other pilot parklets have made their debuts. Hoping your neighborhood will be home to the next urban sanctuary? Then head to the People St website for info on submitting a project proposal.