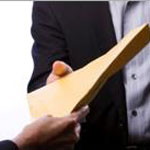 Once I served papers at a support group for drug addicts in Pasadena. I wanted to serve the woman in question outside. But it was raining—everyone had coats and hoods on—and I couldn’t identify her. So I walked in and sat there, clapping at everyone’s speeches. Seeing an empty seat right in front of her, I went over. I said, “Oh, you’re such and such!” She said, “I am.” I handed her the papers and left.

Another time I had to serve a woman as she came to work. I sat outside the elevator. She saw me and proceeded to run down the hallway to her office, with me right behind her. She was like, “Don’t you come in here!” But with process service, they don’t have to touch it. If they know why I’m there, I can drop it at their feet and they’ve still been served.

You’ve got divorces. You’ve got civil litigation. Then there’s the criminal stuff. That can be weird. When you’re confronting someone who could be dangerous and you’re just a Ben Stiller-looking Jewish guy, you have to be a little bit concerned. You’re this unwelcome presence. One time I reached a guy on the phone and he told me that if I tracked him down, “let’s just say you might not have a very good day.” I told my client it wasn’t worth the money for me to pursue it. I don’t need to be beaten up.

Becoming a process server was my version of waiting tables. Just out of college, in the late ’90s, I was a singer-songwriter, and I was not making a living. At first the job felt creepy. To this day, after more than 15 years, it’s not a comfortable thing to do. But I’m good at it. I get the job done. And it subsidizes my music career, which isn’t just a hobby. I do shows. I release albums. I’ve started my own small music label. I’m almost like a superhero who goes into the phone booth to change. My clients see me as Jason Statham and all of a sudden I’m Mr. Singer-Songwriter? It’s like I’m two different people. I keep them separate, but because I’m used to being onstage, I may be less bashful about serving somebody. When you’re trying to get an audience to stop talking and listen, it’s up to you to capture people and usually when you’re not trying so hard is when you connect best. Similarly, if you go to hand a person papers saying, “Take it! Take it!” they’re going to resist. But if you lay back, it goes better.

I served a guy up in the hills of Malibu. He didn’t answer the door, but I saw him in his Jacuzzi. I go, “Don’t want to ruin your evening, but I have some papers for you.” He said, “Oh, just leave them at the door.” I was loose, and he was, too. When I approach somebody to serve them, of course I want to be successful. But if I can be less intense about it—it serves me. No pun intended.