Home Crime They Did It for Money: The Mob-Style Murder of Burbank Widow Mabel... 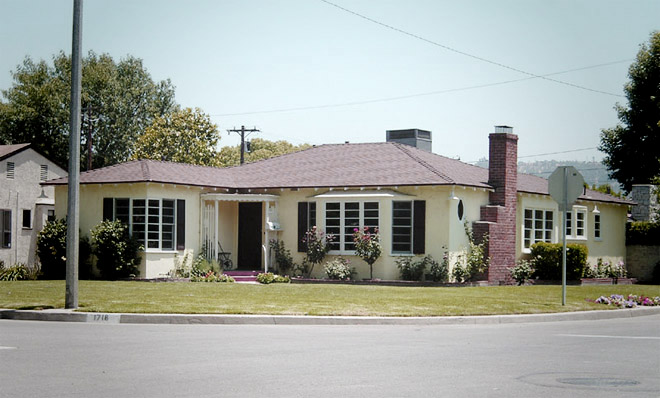 Monohan’s house looks very much the same as it did in March 1953.

If Mabel Monohan’s former son-in-law, Tutor Scherer, hadn’t been a Las Vegas gambler, the 64-year-old widow would never have been murdered.

Mabel Monohan’s daughter, Iris, had been married to Scherer, and when they divorced she got to keep their house in Burbank. When Iris remarried and moved to New York, she gave the place to Mabel. The house was, and still is, in a quiet residential neighborhood, and it was ideal for Mabel and her pet Labrador retriever, Ziggy.

Mabel and Tutor stayed friends despite the fact that he and her daughter were no longer a couple. Their friendship was enough to cause speculation among L.A. and Vegas cons. The story that circulated was that Scherer trusted his former mother-in-law so much that she routinely kept $100,000 of his money hidden in a safe at home, just in case he needed it.

Jailhouse gossip is a dangerous thing. Ex-cons Emmett Perkins and Jack Santos were greedy and gullible and looking for an easy score. What could be easier than robbing a widow in sleepy Burbank?

Mabel and a friend of hers, Mrs. Merle Leslie, went out together on the evening of March 8, 1953.  On that same night in a San Fernando Valley drive-in restaurant, Jack Santo, Emmett Perkins, John True, Baxter Shorter, and prostitute Barbara Graham held a quiet dinner meeting. The four thugs and the attractive redhead were planning to invade Monohan’s home the following night.

Baxter Shorter, the gang’s safecracker, wasn’t keen on bringing a dame along for the job, but Emmett Perkins explained to him that old lady Monohan was a little paranoid about security and spooked easily—they needed a woman to gain entrance to the house.

Initially, everything went according to plan. The gang met for dinner less than two miles from Mabel’s home, and when they felt it was dark enough, they drove over to her property. The anticipation was high—$100,000 was one hell of a lot of cash for four ex-cons and a junkie prostitute.

Barbara went up to Mabel’s front door and rang the bell. As predicted, Mabel didn’t immediately open up. A few tense moments ticked by as the porchlight came on and the murmur of a muted conversation drifted over to the men who were waiting in the dark.

Barbara had to have been very convincing to persuade Mabel to open her door to a stranger, but she sold the old lady on the story of a broken-down car and how grateful she’d be if she could just use a telephone to call for help. Mabel was reluctant, but the young woman was alone, and the widow knew firsthand how scary it could be for a woman on her own at night.

The men in the cars watched as Mabel finally opened her door to Barbara. All hell was about to break loose.

Mabel Monohan had been spending a quiet evening reading a mystery novel, The Purple Pony Murders, when she was interrupted by the knock at her front door. When she opened up, Barbara followed Mabel into the house—and after her came John True, Jack Santo, and Emmett Perkins.

After a cursory search of the house, Jack Santo went out to get their safecracker, Baxter Shorter, to tell him that they couldn’t find a safe. When Shorter got into the house he saw Mabel on the floor of a hallway; she was bleeding profusely and moaning through a gag over her mouth. According to John True’s statement, Graham was holding a nickel-plated revolver. She allegedly handed it to Perkins and said “Knock her out!”

Shorter supposedly grabbed Perkins and threw him to the floor and yelled at him: “What the hell are you doing? This isn’t the way it was supposed to be! This is no good!” When Shorter glanced down at Mabel, she appeared to him to be choking on the gag. Shorter was a safecracker, sure, but he wanted no part of cold-blooded murder. He managed to get John True to cut the gag off Mabel’s mouth, but she looked to be in bad shape.

True would tell the story a little differently later on, casting himself as the lone do-gooder. He would also have more to say about Graham’s involvement in beating Monohan.

It was chaos in the house as the gang ransacked it, searching for a safe that didn’t exist. Furniture was torn apart, closets emptied. Nobody really cared what happened to Monohan; the gang had other worries. It was beginning to dawn on the group that the caper was a fiasco, but they were so busy mourning the loss of their cash windfall that they couldn’t spare a moment for the woman who lay dying on the floor.

While his companions were getting ready to leave the scene of the bungled crime, Shorter rummaged through a drawer and found a utility bill with the address of the house on it. He was going to make an anonymous call to get help for the woman. Shorter didn’t want to be in the middle of a murder rap. He would do time if he had to, but killing the old lady could mean the gas chamber.

Once it sunk in that they’d botched the whole plan, the gang split up into the two cars in which they’d arrived. True, Perkins, and Graham rode in one car; Shorter and Santo in the other.

Baxter told Jack that he intended to try to get help for the woman back at the house. Jack said, “I don’t give a damn what you do. That woman stopped breathing before we left.”

Baxter dropped Jack off at the meeting place, and he was warned in no uncertain terms to keep his mouth shut or there would be dire consequences.

Shorter went to the nearest gas station and found a telephone booth. He dialed “O”, got an operator, and told her that a woman needed an ambulance at 1718 Parkside Drive. Before he could be asked any uncomfortable questions, he hung up the phone and sped off.

The operator tried to dispatch an ambulance to the address she’d been given, but it didn’t exist—not in Los Angeles anyway. Shorter had been so shaken up that he’d forgotten to mention that the house was in Burbank.

Mabel Monohan’s body wasn’t found for two days. Her gardener, Mitchell Truesdale, had come to do some work and to collect his paycheck. When he went to the front door he noticed that it was ajar, and that was highly unusual. He gave the door a nudge and started in. He could see that the normally neat house had been turned upside down, and the smell of death was pervasive. He found Mabel’s body, and he saw blood spatter on the walls and floors. Monohan’s Labrador retriever, Ziggy, was whining at the back door.

Truesdale ran to a neighbor’s house and called the cops. An inquest was held, and the verdict was that Monohan’s death was a homicide caused by person or persons unknown.

Mabel’s daughter Iris had only recently returned to New York after spending some time with her mother. She offered a $5,000 reward for information leading to the arrest and conviction of the killer(s). The investigation into the slaying of the Burbank widow began.

On March 26, 1953, five men were arrested and held for questioning in the slaying of Mabel Monohan. They were Solly Davis (a onetime Mickey Cohen lieutenant), William Upshaw and John Wilds (both Mickey Cohen associates), Joe Allen, and Baxter Shorter.

All five were career criminals—Upshaw had been frequently arrested on gambling charges, Davis had been incarcerated in two federal pens, Leavenworth and Atlanta, and in the New York State prison Sing Sing. Baxter Shorter had a record that dated to 1927.

The men were acquainted with Mabel Monohan through her former son-in-law, Las Vegas gambler Tutor Scherer, but the cops had to kick the bad guys loose; they didn’t have enough to hold them. Still, the arrest was enough to convince Baxter Shorter that his best chance for staying clear of the gas chamber at San Quentin was to turn State’s evidence before any of the other members of the gang were busted and could beat him to it. There’s usually only one get-out-of-jail-free card available in a capital case, and Baxter grabbed it.

Baxter told the cops he’d gone along on the Monohan job as a look-out. Of course that was a lie, he was there to crack the safe supposedly hidden in the house. Shorter further stated that he’d seen Perkins slug Mrs. Monohan on the head with the butt of a gun. He also said that he’d been horrified to witness the murder. That may have been the truest statement he made. He was undoubtedly terrified to have become involved in a death penalty case.

Shorter probably would have walked on the Monohan murder and lived to commit other crimes if details of his statement hadn’t been leaked by someone close to the investigation. Once his duplicity became public, Baxter Shorter’s days were numbered.