Home College Admissions Scandal These USC Students Want You to Know Exactly How They Got Into... 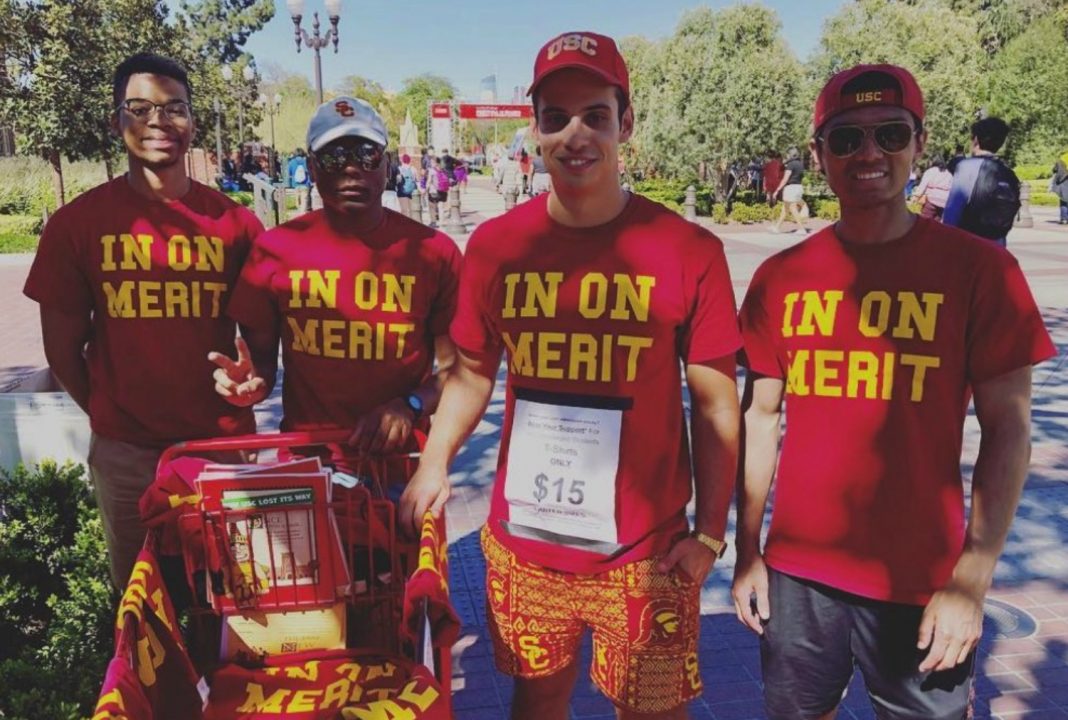 Amid the massive college admissions scandal, some USC students are grappling with an uncomfortable question: How did their classmates get in?

It’s a question William Marzella, a junior studying mechanical engineering, recently answered on a T-shirt. Last weekend, at the L.A. Times Festival of Books, Marzella debuted a new line of shirts reading “In On Merit,” using the same school colors that adorn merch at USC’s library.

According to Marzella, he and some friends sold 50 of the shirts in a single day. He hopes to sell a lot more during football season. “Obviously, this issue isn’t going away,” he told Los Angeles.

His fashion statement pokes fun at the perceived divisions on campus between those who were admitted because of their aptitude and those suspected to have used other means.

“There are so many students here who have fought to be here, and there are so many benefits to having those people on campus,” he says. “I hope we’re shedding some light on that.”

And it’s for a good cause: all the profits from Marzella’s T-shirt enterprise will go directly toward buying a $3,000 unlimited meal plan for his roommate, he says.

That roommate, Carlos Acosta, insists he never asked for Marzella to raise money for him, but he appreciates the gesture. During a busy day of classes, he sometimes forgets to eat at all—and it’s not convenient to go off campus to buy groceries. “If I don’t have enough food when I get back home, I don’t eat,” he says.

So far, Acosta has only worn the “In On Merit” shirt to Costco, where he ended up on the receiving end of a lot of (predictable) questions from strangers, like “what do you think of the scandal?” On campus, folks seem less interested.

Overall, Acosta says the differences between his day-to-day experience of campus life and that of his classmates has been jarring. “I come from a very small town in Venezuela where my grandfather owned a farm, and my school was inside a farm,” he says. “The people around me were just like of the same status. It wasn’t as divided as I see it here.”

He remembers peeking at a classmate’s laptop during class and seeing him buying a $2,000 ring. “My first thought was, wow, did your parents pay for the building?” he recalls. “I sometimes have that question in my head: How did you get in?”

“I see in L.A. that status is what matters: You’re popular if you’re rich”

Acosta’s family recently secured asylum in the U.S. after his father, a journalist, received death threats in his native country. “We were a little bit more comfortable there,” he says. “Here I do feel like I get a different treatment because I don’t have a certain amount of money. I see in L.A. that status is what matters: You’re popular if you’re rich.”

He says he wishes that the elite families who tried to bribe their way into USC had created scholarship fund for students like him instead. “If you want to get your kids into USC,” he suggests, “do it in a positive way.”

RELATED: Demonstrators Pitch Tents at USC to Protest Displacement (and Everything Else)