Home Business There’s Way Too Much Talent Leaving the Building in the Latest Round... 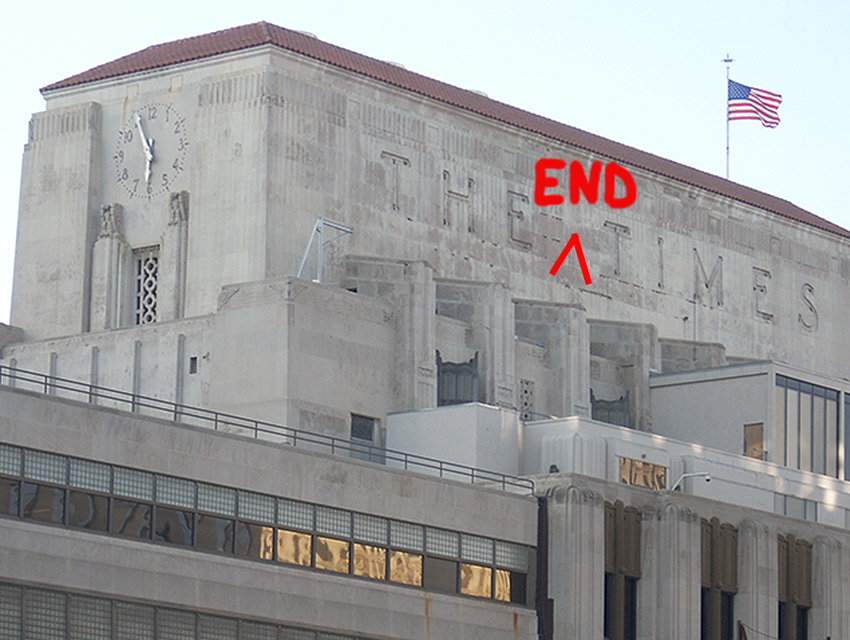 The Los Angeles Times has offered many buyouts over the years, but this latest round is a watershed moment in the paper’s history. LA Observed published a list of employees who are packing up their offices this (Thanksgiving, no less) week, and the names on it left me slack-jawed—and nauseous. We’re talking about some of the paper’s heaviest artillery leaving the battlefield: at least six bureau chiefs, two assistant managing editors, and top dogs who oversee the Calendar section, Column One, and political coverage for the city and state.

Of course I was upset to see some names on the list from my days working at the paper. From 1995 to 2000 I was an editor at the Los Angeles Times Magazine (I bailed months after the Tribune purchase; the writing was on the wall). Though I also contributed to other parts of the paper, I spent most of my time there happily sequestered on the fifth floor learning the fundamentals of putting out a magazine. Alice Short, an assistant ME who is taking this buyout, did an excellent job editing my stories and giving me guidance when she was editor of the magazine; I fact-checked Sherry Virbila’s restaurant reviews, and she was always a delight; I worked with food editor Russ Parsons and Calendar writer Susan King on a few projects, and several of the other writers on the list wrote terrific pieces for the magazine. What is equally upsetting are all of the names I know, but don’t know personally: the many bylines I have relied on for a few decades who owned their beats, just owned them, like Maria LaGanga up north (such a graceful writer) and Tony Perry down south (I’ll read anything he writes), or Henry Chu in London and all (!) of the obit writers, or Sandy Banks, who wrote her heart out in every column. I understand that a lot of them couldn’t pass up the opportunity, and that many are feeling it’s time for them to move on—clearly, it’s not the happiest place on earth, and I hope they land someplace that appreciates them more. It’s the mass exodus of institutional knowledge that scares me. Not knowledge about the Times, but about L.A., the nation, the world, their beats. You can’t write that stuff down in a book and pass it on. It takes years to learn how to tell a big story.

Mentors have been an essential part of my career, and we often refer to the work environment here at Los Angeles magazine as permanent grad school. When a young’un arrives—and don’t get me wrong, I’m all for youthful energy and new ideas—it’s us, ahem, middle and upper-middle agers who take them under our wings and try to help them fly. I’m hoping there are still plenty of editors at the Times who can do that for the invariably cheaper and not-yet-established employees who will fill these empty spots—assuming, of course, these spots are filled. (For God’s sake, Tribune honchos, the London, San Francisco, Las Vegas, San Diego, and New York bureaus must be maintained.)

Do I hold firm to my belief that it’s our civic duty to subscribe to and support a daily paper for this city? I do, but man, given the decisions that Tribune’s Jack Griffin and his team are making in Chicago, it’s getting increasingly tough to toe that line. As long as Mary McNamara and Steve Lopez and Christopher Hawthorne and Carolina Miranda and Robyn Dixon and Michael Finnegan, among others, are still in the game, I’ll hang in there. But if they leave the field, my subscription will be right behind them.