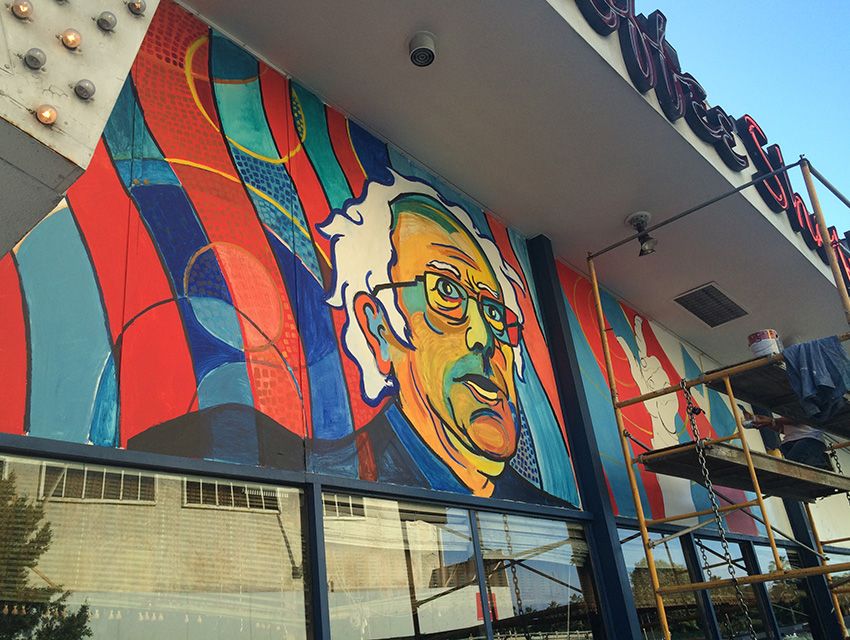 No offense (okay, some offense) to the zombie Bernie murals downtown and in Silver Lake (seriously, though, is his scalp deteriorating?), but it’s time we, as a city, breathed some life into our democratic socialist propaganda.

With his promises to break up the banks and make college free, Sanders has captured the hearts of all the millennials plus Dick Van Dyke. But as much as the septuagenarian has made the class struggle cool again, Bernie-themed artwork in our fair city has been a bit lacklustre. That’s about to change.

A couple murals—one the word “Bernie” in graffiti style by artists Cre8 and KEO, the other a colorful portrait of the man himself by Dionisio Ceballos—are going up on the old Johnie’s Coffee Shop building on Wilshire and Fairfax. The group behind the painting is ICU Art—a company that specializes in commercial murals on “high-visibility walls in trendy urban areas,” per their Web site. The building itself is a Googie gem that was built in 1956 but has sat vacant since 1994, the glimmering light bulbs that adorn its roof slowly but surely burning out. It was designated a Historic-Cultural Monument in 2013, though it was not apparent what exactly what would become of it. Safe to say no one expected it be be transformed into a blazing beacon for the far Left.

When I walked past last night, I noticed that in addition to the painters, a worker was prying off some of the no-longer functioning neon tubing from around the red letters on the front of the building. Hopefully the intent is to refurbish the sign to its former glory, but at this point the immediate future of Johnie’s—like that of the Democratic primary election itself—is unclear.