Home Crime There Will Be Blood: Hollywood’s Most Wanted Spatter Specialist Takes Us Behind... 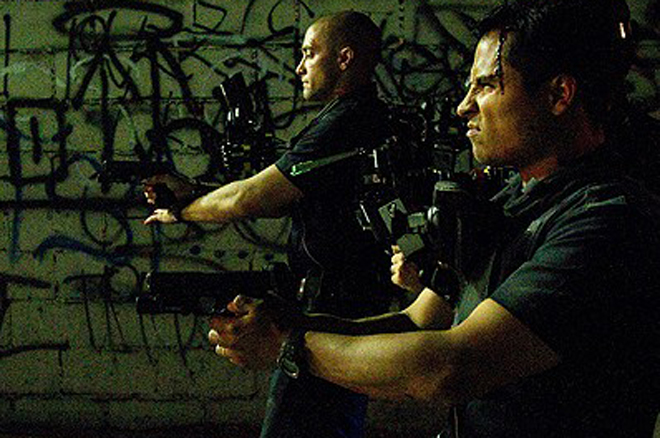 Over your 15-year career you’ve designed sets for some serious L.A. shoot-em-ups, including David Ayer’s End of Watch. How do you approach designing a set that is gruesome?
When I read a script, I try to figure out what the tone and the meaning of it is, regardless of whether it’s a violent movie or a dance film. End of Watch and [the upcoming film starring Arnold Schwarzenegger] Ten are very specific, both directed by David Ayer. Even though they’re fictional, they’re both heavily based in reality. For example, End of Watch was about South L.A. and Mexican drug lords. What I did to prepare for designing the film’s sets was immerse myself in research for as long as I possibly could: traveling through the neighborhoods where the stories took place, meeting the people in those neighborhoods—those types of things. There are also some pretty gruesome Web sites you can look at, and we looked at quite a bit of them. I usually have a pretty strong stomach, but there was one video in particular that we watched that falls into the category of “things I wish I’d never seen.” It was of someone being tortured, and it ended up being the basis for one of the most brutal scenes in the film, when Jake Gyllenhaal and Michael Peña walk into a house to find decapitated bodies and a dead woman in a closet. I used several different methods of research.

How often does your inspiration come from other examples of film or television?
To be perfectly honest, I have not used other film or television much to inspire my own sets. For both End of Watch and Ten the look and feel are very realistic, so most of the research I did was on real crime scenes. Sometimes, though, I’ll look at other TV shows that are inspirational: Se7en—any movie by David Fincher, really—is beautifully designed, and the violence is evocative. Other movies that did violence and emotion really well are 28 Days Later, The Exorcist, and Rosemary’s Baby. Rosemary’s Baby is really violent, but you don’t see everything. I think what you leave out is equally as important as what you put in. You think about where you want to get the audience emotionally, and you try to get the world as realistic as possible, but you can also play with certain colors or clues to take the audience on a ride.

Does the level of violence in a film affect your choice of color scheme?
I don’t think that the level of violence affects the palette too much. The film might be a stylishly violent movie—something like Django Unchained. That movie had a lot of violence, but it’s also a period film. I thought the violence was beautifully handled. The same goes for Kill Bill and A Clockwork Orange. Color palette has more to do with the world you’re creating: If the world is a depressing, bleak world, then the palette might be dingy. For both End of Watch and Ten the look had to be very textured: color with dirt and blood on top of it. I have a very controlled color palette—though every set is different, you want the movie to have a cohesive look.

Once you’ve settled on a design, what exactly goes in to building the scene of a crime?
In that one particular scene in End of Watch, where there are bodies and body parts, for example, the special effects team was in charge of creating dead bodies; there are these warehouses filled with every size and age and race and gender of dummies, and they’ll make them up using makeup depending on certain requirements: Is it a fresh dead body? Has it been there for six months? That’s the effects department’s expertise. My job is to create the setting for those bodies. That End of Watch set was pretty stark and bleak. It was a house where people had once lived, but they had been kidnapped and tortured, so there was evidence left behind of their lives, which was creepy and sad. We went straight to the foundation of the house and dug a dirt hole for the bodies, then created the aftermath of the torture—the place where they’d been hung, the chair that the torture victim had been sitting in, blood all over the room. You have to think about things like where the blood would have landed if they were being tortured in this way or that.

Is blood spatter difficult to get right? Or is it, spread some over here, pour some over there?
It’s actually a bit difficult because there are different types of blood: There’s movie blood for when someone gets shot, movie blood for a set. When I’m trying to do an aftermath scene, we have to create the blood in the paint department because special effects blood that might look great coming out of someone’s head is actually too bright and too red to represent blood that’s been sitting for a day. Aftermath blood has to be darker and more congealed. David [Ayer] is very much a perfectionist when it comes to realism. We did substantial blood tests the week before filming to show him samples and make sure that the look of the blood was correct. It was funny, because we perfected a certain kind of blood that he loved on End Of Watch, and then last fall we were doing another film together, and we had a different paint department. He wanted the same exact blood and we couldn’t recreate it. After quite a bit of trial and error, we finally got there.

Does the violence of the films you work on stay with you?
When I’m working on a movie where the world is violent, it definitely affects me. It stays with you all day, every day, and creeps into your dreams as you’re working on a film. It did for me on End of Watch, and it did for me with Ten as well. The world of the film, for better or for worse, inhabits my daily life whether I’d like it to or not.