Home Uncategorized The Wilshire Grand will be Demolished This Month 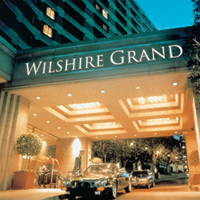 Much of downtown’s gentrification during the last ten years has involved preserving the past, not tearing it down. Not so for the Wilshire Grand. The 896-room hotel is checking out this month after a nearly 60-year stay. It opened in 1952 as the Los Angeles Statler and has hosted governors, presidents, and performers like Tony Bennett and Xavier Cugat. A 45-story luxury hotel and adjoining 65-story office tower will take its place—the tower will be the second-tallest building in L.A. The project is being financed by a subsidiary of Korean Air. Maybe Tony Bennett can sing at the grand opening.