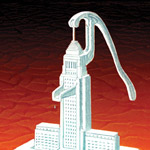 Money and common sense have never been the best companions. Consider the City of Los Angeles, which faces horrific financial woes largely because nobody was paying attention to a problem that in hindsight looks pretty obvious. As it now stands, a typical L.A. police officer or firefighter can retire at 55 and receive up to 90 percent of the salary made in the last year of employment. For life. Plus free health care, also for life. So if you put in 30 years on the job and live an additional 30, the city is essentially bankrolling almost two full salaries, pre- and postretirement. Other city employees enjoy nearly the same benefits. It’s quite the arrangement, and it’s untenable. Common sense tells you that—what entity, private or public, can pay its people twice and remain solvent for very long? Steven Frates, director of research at Pepperdine University’s Davenport Institute, calls it the “triumph of optimism over experience.”

This is a story about pensions, but please don’t flip the page. L.A.’s overloaded retirement program is putting a stranglehold on municipal finances, and while many elected officials wish the thing would just go away, it won’t. Simply put, the city is committed to paying way more in pension benefits than it can afford, a gap that’s expected to widen during the next several years. For now, roughly one out of six dollars in L.A.’s general fund—the operations part of the budget—goes toward paying pensions. By 2014, the amount could easily be one out of three. When so much money is required for retirees, less money is available for libraries, parks, trash pickup—perhaps police and fire services, too. The worst-case scenario would involve massive layoffs, crippling service cuts, significantly higher taxes, and debt levels running into the billions of dollars. Similar shortfalls are being faced by the State of California and in cities and states all over the country. Nobody knows what the total price tag will be—maybe $1 trillion in obligations, maybe more. “It’s going to spark a crisis that will be comparable in magnitude to, or larger than, the banking crisis,” says Joshua Rauh, an associate professor of finance at Northwestern University’s Kellogg School of Management.

As bleak as all this sounds, city officials flatly dismiss the one possible answer: Chapter 9 bankruptcy protection. Mayor Antonio Villaraigosa says there is zero chance of a filing in the final three years of his term. Politically, of course, it would be career suicide to support such a drastic course; in cities where bankruptcies have been filed, elected officials were booted from office in the next election. “The circumstances would have to be catastrophic,” says Gary Toebben, chief executive of the Los Angeles Area Chamber of Commerce. “Some outside entity would have to force them into it. I don’t think it’s going to happen.” According to Miguel Santana, the city administrative officer and L.A.’s top budget official, “bankruptcy is what you do when you have no other options, and the city has a lot of other options.”

The mayor and city council have been talking up those options—ideas such as lowering the benefits package for new hires, coaxing current employees into making larger contributions, and raising the retirement age. But the unions are not showing much interest, and under state law cities cannot roll back a retirement benefit for current workers unless a new benefit of equal value is provided. That would nullify any potential budget savings. Besides, the adjustments wouldn’t begin to eat into the hundreds of millions of dollars already owed to retired city workers (L.A.’s pension payout for 2010 is more than twice the cost of running the fire department—and that excludes health care). The only viable solution, short of an economic miracle or a federal bailout, is to bring in a bankruptcy judge to untangle the city’s obligations.

Roughly 600 U.S. municipalities have filed for Chapter 9 protection since the statute was created in 1934, when Congress modified the bankruptcy laws to accommodate cities and towns that had been devastated by the Great Depression. Chapter 9 filings are different from Chapter 7 or 11 corporate bankruptcies because they don’t involve liquidating assets (no selling off of City Hall, for example). The primary purpose is to restructure a city’s finances by allowing contracts to be renegotiated. That includes pension contracts. While offering a way out, a municipal reorganization would be complicated, and it could put pension holders in the position of making do with less money than the city had promised to deliver. The City of Vallejo, California, provides a cautionary tale. It took on a pile of debt several years ago that was intended to pay for the salaries and benefits of police officers and firefighters. Housing sales were supposed to help generate enough tax revenue to cover those costs, but the homes never got built, and the city was forced into Chapter 9. After two-and-a-half years, there is still no resolution on the pension overages.

L.A. has pension programs for police officers and firefighters as well as most civilian workers. (The Department of Water and Power has a separate plan that’s not a big factor in the city budget.) They are all considered “defined benefit plans”—that is, the city has promised to provide the entire pension regardless of economic conditions. The package easily trumps social security payments, which city workers aren’t eligible for anyway, and 401(k) plans, to which an employer agrees to contribute only a specific amount. Mind numbing as it might seem, the operation of a pension fund is pretty straightforward. Money is received three ways: from employee contributions, employer contributions, and investment returns (by far the biggest component). Everything is based on how much of a return is expected in future years. If it turns out to be below the anticipated percentage, the city has to fork over the difference.

Years ago government pension funds were required to put most of their investment money into conservative products, usually bonds. Then in 1984, a state voter initiative lifted many of the restrictions, and pensions moved into higher-risk vehicles that included stocks and real estate. By the 1990s, investment returns skyrocketed, and the unions representing city workers began asking for richer benefits. City officials were happy to oblige and went so far as to reduce their own annual contributions because the plans had socked away more money than was needed. They also kept anticipating extraordinarily high earnings that were supposed to pay for the added benefits.

Well, it didn’t work out that way. Investment returns started shrinking after 2000, and the city had to contribute more money to keep the retirement payments on track. In 2002, pension contributions represented 5.4 percent of the general fund; now they’re nearing 20 percent. Even assuming that L.A.’s pension funds will receive the 8 percent annual returns they’ve been expecting—which, given the lackluster economy, might turn out to be wildly optimistic—the city’s share of the pension pie will still grow sharply between now and 2014. The backlog of obligations is just too huge. “I guarantee you it’s going to be terrible,” warns former Los Angeles mayor Richard Riordan, who has been pushing for reform. “It’s not only going to mean closing libraries and not fixing streets, it’s going to mean cutting back dramatically on the police and fire departments.”

Bringing in more tax revenues might cut into the funding gap, but there’s a problem with that: The city is in slow-growth mode, partly due to the recession, though mostly as the result of companies having been discouraged from setting up shop here. By taxing businesses too much and too capriciously, by creating unnecessary regulatory roadblocks, and by demanding high wages as a way of appeasing labor interests, the city has ceded much of the area’s retail activity to Glendale, Thousand Oaks, and other outlying communities—and with it huge amounts of tax revenue. “Los Angeles did a number of things to shoot itself in the foot,” says Pepperdine’s Frates.

Rubalcava’s main worry: The longer the city ignores the problem, the bigger the cuts are likely to be. “Will we decide to file for bankruptcy before having to lay off a quarter of the LAPD?” he asks. “Will we decide to declare bankruptcy before we shutter a third of our fire stations? I would argue that bankruptcy is a better option than having ambulance response times go to 28 minutes.” Santana is not nearly as downbeat, noting that the city was able to close a huge deficit for the current budget year. But unlike most lawmakers, he’s also realistic. “Sometimes we have to just say, We can’t do this anymore,” Santana says. When I ask whether the city’s massive obligations could result in police and fire reductions, he acknowledges, “I think it’s a legitimate concern.”

The trouble with Rubalcava’s catastrophic thinking is that, for the time being, Los Angeles continues to function more or less normally. The trash gets collected, the cops respond to 911 calls—the city actually trimmed a huge palm tree in front of my house, the first time that’s happened in years. At a city council session last May, when budget cuts for several departments were being finalized, pensions never came up. Instead the public comment period had people complaining about reductions in library hours, the elimination of city-subsidized child care, and a paring down of the Department of Recreation and Parks. “It’s easy to pick on the kids,” said a frustrated parent. “They can’t speak up. They don’t vote.”

The lack of awareness is so extreme that council members had to hold a daylong session for themselves in August that was dubbed “Pension Reform 101.” I wish the primer would have concluded with urgent commitments to dig into the retirement quandary—immediately—but that’s not how Los Angeles government works. Hearings are held, action is put off, elected officials leave office, and what had been a manageable problem keeps festering until it grows out of control. “Three years from now,” says Toebben, “we’ll have a new mayor, and that will be the point this becomes a crisis and the new mayor will be asked to lead.” The question is, Will it be too late?