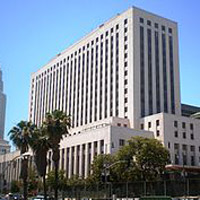 Historic Spring Street Courthouse’s Future Is Uncertain
Will it be sold to a private developer?
[LAT]

Stowaway Kitten From China Gets a Home at the Beach
“Ni Hao” will be living in Rendondo Beach, thank you.
[NBCLA]

9th Circuit: Sex Between Prison Guards, Inmates Should Be Presumed Coercive
Judges have also reinstated a harassment claim made by an inmate in Idaho against a female guard.
[LAT]