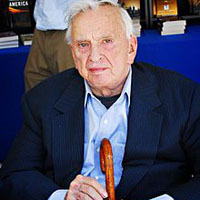 Anaheim Police Have Been On a Bit of a Shooting Spree
The department has wounded or killed more people this year than in 2010 and 2011 combined.
[NBC]

Amidst Controversy, Chic-fil-A Hosts Appreciation Day
The LGBT community does not appreciate it.
[KABC]

Gavin Polone Challenges Nikki Finke To Ruin His Career
Big mistake, or bluff calling at its most brilliant?
[NYmag]

Gore Vidal Dies at 86
The novelist passed away in his Hollywood Hills home Tuesday.
[LAT]