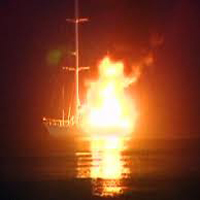 Protestors Hit With Pepper Spray in Santa Monica
The madness was caught on tape.
[KTLA]

Missing 12-Year-Olds Found
They were at the Gold Line station of all places!
[KABC]

Barbara Streisand Might Perform at Obama Fundraiser in Hollywood
Babs to the rescue.
[Hollywood Reporter]

Scientists May Have Lead on Biology of Autism
It’s in the genes.
[NYT]