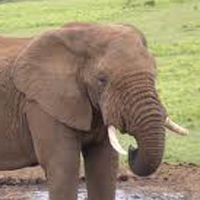 Elephant Fatally Attacked by Another Elephant At San Diego Zoo
The suspect pool narrows in this classic whodunit.
[LA Times]