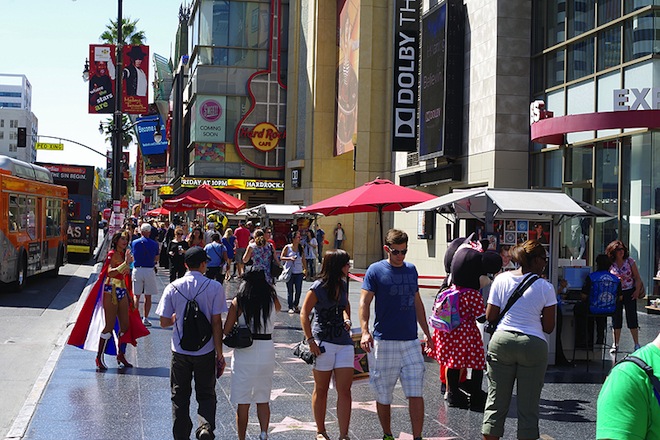 Hollywood is one of the most interesting neighborhoods in Los Angeles, beloved and loathed in equal amount by locals and visitors alike. It announces itself everywhere with a sign that looms over most of the city, and a history that is written on its sidewalks.

The Walk of Fame is an internationally known tourist attraction that celebrates the achievements of those in film, television, music, and radio. While that’s great and all, Hollywood is so much more than “Hollywood,” so much more than the Industry. It’s a place for all sorts of creatives. The people who cook and design and make art deserve to be honored for making L.A. what it is today, too. As you might expect, I came up with a few suggestions in regards to folks who deserve their own star on the WOF:

Suzanne Goin
Culinary art
Goin is basically the face of Los Angeles cuisine. Her hugely successful restaurants Lucques and A.O.C. express her California cool culinary aesthetic. She is an accomplished author and has had her own television show. What makes her so Hollywood? Neighborhood favorite Hungry Cat is located at Sunset and Vine.
Fellow contenders: Joseph Musso & Frank Toulet of Musso & Frank, Adam Fleischman of Umami Burger, whoever runs Powerhouse

Diana Nyad
Sports
This homegirl attempted to swim from Florida to Cuba not once but five times—and eventually succeeded. She trained right here at Pasadena’s Rose Bowl Aquatics Center. She was attacked by jellyfish and Portuguese man-of-war—and was swimming without a shark cage.
Fellow contenders: Kobe Bryant, Magic Johnson, Oscar De La Hoya

Elon Musk
Design & Technology
One of the richest, smartest men in the world, Musk is revolutionizing how people travel. His Tesla cars are a product of beautiful design and scientific excellence. They’ve also become the new automotive status symbol. He’s forging ahead to the moon with SpaceX and has envisioned a speedier way to travel with the Hyperloop. Musk is basically that dude from The Terminator in real life.
Fellow contenders: Ray & Charles Eames, Folkert Gorter, Kate & Laura Mulleavy

Bret Easton Ellis
Literature
Like him or not, Ellis has defined and redefined what it means to be a contemporary Angeleno with Less Than Zero, The Informers, and Imperial Bedrooms. Oh, and another thing: he made American Psycho and basically lampooned Manhattan for decades. This man deserves far more credit than he gets! He has a great Twitter feed, too.
Fellow contenders: Raymond Chandler, Charles Bukowski, Joan Didion

John Peterson, The Man Who Shines The Stars
Local Oddity/Folk Hero
If you’ve strolled the Walk of Fame during the day, you’ve seen John Peterson at work. He is a former television repairman who found himself homeless and turned to cleaning the stars every day. After years of doing this, the Hollywood Entertainment District hired him to clean the stars. He’s a local legend! And, really, he deserves all the credit for keeping the stars looking their best.
Fellow contenders: Superman, Five Dollar Guy, West Hollywood Jesus, Angelyne