Home Uncategorized The view from near 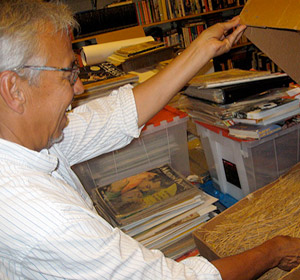 Designer, editor and Urban anthropologist Jim Heimann, the subject of our September “Speak Easy” column, dropped by the office today to deliver a hot and fresh copy of his new book for Taschen: Los Angeles: Portrait of a City. The new book, which the magazine called “The most comprehensive visual history of L.A. ever attempted” is a real stunner. This phone book-sized beauty is absolutely stuffed with images of the city as it developed over the last century and a half. Many of the photos were pulled from deep in the vaults, but even the familiar ones are new again in their remarkable crispness and clarity. The book brings long gone corners of the city back to life and forces you to re-examine the familiar because now you can finally delineate every grain of beach sand and every neon tube hidden within. Taschen is planning a gala benefit release party for the book on November 19th. Proceeds benefit the Los Angeles Conservancy. I’ll be there along with Heimann, Buzz Aldrin, Diane Keaton and Benedikt Taschen at Crossroads of the World in Hollywood. It’s always reassuring to look up and watch that neon globe eternally spin into the night.