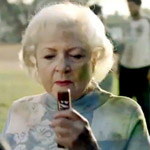 Betty White stars in a Snickers commercial that aired during the Super Bowl last year.

Teenager Bitten By Rattlesnakes 6 Times While Trying To Get Cell Service
Add “Rattlesnake nest in Jamul” to the map of places your provider drops calls.
[LAT]

Man Shot While Waiting to Buy Call of Duty: Black Ops 2
Since the shooting appears to be gang related, the incident may be less ironic than it sounds.
[NBCLA]

ABC Buys Script For Show Based on Disneyland’s Big Thunder Mountain Railroad
We hope a goat bleats in the finale.
[CBSLA]

L.A. Home Prices, Sales Way Up
The city’s got a lot of hot pockets (and not the kind you microwave).
[LAO]

Super Bowl Ad Space Nearly Sold Out
So you know, get on it if you were planning on spending $4 million to air a spot.
[THR]