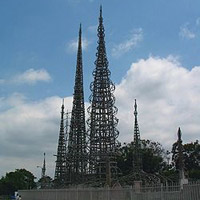 Projection: By 2030, 44% of Californians Will Be Obese
A report produced by two public health non-profits is crushing.
[LAT]

Bud Goldstone, Watts Tower Proponent, Dead at 86
The engineer had fought to save the towers from demolition in 1959.
[KCET]

Medical Marijuana Ban Petition Certified
The City Council has 20 days to make its next move.
[KABC]

The Dodgers Are Having a (Defining) Moment
The team’s next three games are do-or-die-esque.
[ESPNLA]

The Academy Pushes Up Nomination Announcement
Oscar hopefuls will be by their phones on January 10.
[Variety]

Driver Dies in Rolling Hills Crash With Horse
The horse, which had broken free from its stable, didn’t survive, either.
[CBSLA]

Burning Body Discovered Downtown
A woman who was on fire in the 300 block of West 94th Street was pronounced dead.
[NBCLA]