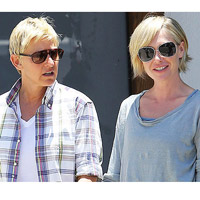 Simi Valley Man Suffers Heart Attack While Fleeing After Murdering His Ex
Karma may work quicker than anyone thought.
[KTLA]

Two Planes Intercepted During President Obama’s Southland Visit
A Cessna 206 and a Cherokee PA 28 were kindly escorted out of the no-fly zone.
[CBS]

Paris Jackson Was Confused By Wearing a Mask
Michael’s daughter opened up to Oprah.
[People]

It’s Not Easy Growing Up Gay In America
This even-less-surprising-than-the-last headline comes courtesy of more than 10,000 young gay and lesbian survey takers.
[LAT]

Ellen and Portia Have Matching Dos
Are they having a Brad & Gwyneth phase?
[People]