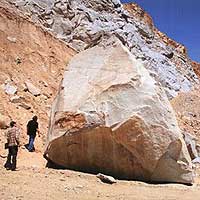 Armed Man Wounded After Taking Hostage at Buena Park Bank
FBI and SWAT officers are on the scene.
[KTLA]