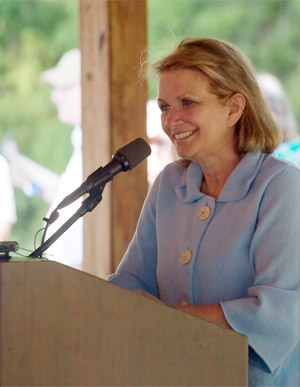 I had counted on not hearing anything from or about Elizabeth Edwards for a good while. The hope was that she would take care of herself at her sprawling new ranch house outside Raleigh, North Carolina, raise those late-in-life children, fight her stage 4 cancer, and try to forgive her straying mate. This is the work, one figured, of a lifetime—and she didn’t potentially have all that much time left.

Instead, she is back with her best-selling book, Resilience, and it is as sad a book as you will ever read. It fairly aches as you hold it in your hands. As with many things to do with Ms. Edwards, there are inevitable questions: Why write this? What is the need? Is this the legacy you want to leave your kids, a tale of their father’s infidelity and your own agony as a woman trying to live out her life with dignity? Why bring back the scrutiny? Why invite Oprah to walk through your photo-lined halls, your errant and chastened husband standing beside you? To sell books?

Everywhere around me I have heard women talking about Elizabeth Edwards, about whether she couldn’t and shouldn’t have left well enough alone. Her story touches every female nerve—I don’t care if you’re a Washington wife or a Los Angeles one. We ask, Would I have stayed with this man? In the beginning, when she first took the national stage, she seemed so fresh, a class act. With her wide smile and straight talk and extra pounds, she was real, winning. If a woman of such obvious warmth and intelligence loved a man like John Edwards, then he must be OK, too. She made believers of us, touting his goodness, his vision for the country, even though his expensively coiffed hair and mediagenic voice were a tad suspicious. There were overtones of another Slick Willie, the Southern poor boy who had worked and charmed his way to the top. By her presence on the campaign trail, Elizabeth Edwards helped mute the public misgivings about her husband when he ran for vice president and then for president.

What we didn’t realize watching her during that second run was that she already knew he was a cheater. He had confessed to her his extramarital dalliance with a campaign videographer, but she had stuffed her heart and wounds somewhere and agreed to be beside him as he sought the highest office in the land—this, after her diagnosis and initial treatment for breast cancer. Standing by your man is one thing, but letting him run for the presidency with your acquiescence—no, with your full support—is quite another, especially knowing that the country had had it with the flagrant behavior of Bill Clinton, knowing that if Edwards’s affair came out midrun, he would be torpedoed out of the race, ignominy and the wrath of Democrats raining down on their heads. At first take, Elizabeth Edwards seemed the anti-Hillary—not tough, not calculating, not someone who had struck a bargain with the devil. That was a huge part of her likability. As it would turn out, she had made exactly the same bargain. Why? What was she thinking?

Resilience is Elizabeth Edwards’s response to these questions. That she loved him—and continues to—is the short answer. That big, primal, he’s-my-soul-mate love. She talks again and again about her penchant for the old swoony love songs. “They all turned out the same,” she writes. “Never thought you would be standing here so close to me. There’s so many things that I should say, but words can wait until some other day. Just kiss me once, then kiss me twice, then kiss me once again. It’s been a long, long time.”

She says her marriage with John Edwards was a romantic fantasy: the happy house, the kids, the law careers—his and hers—until the day their 16-year-old son, Wade, was killed in a car accident. The heart of this book is not about her love for her husband but rather her love for the son they lost. One can see how the death of this golden child put a scar on the Edwardses’ lives that nothing fixed or changed: not the new babies, not the political successes. What you see, in effect, is John Edwards trying to carry on while his wife is still visiting the cemetery day after day, year after year, carrying the torch for her firstborn. The pain is so vivid that everything that comes after—her cancer, her husband’s infidelity—is secondary. She says as much. Healing be damned. There is something almost noble about her suffering. But, oh, is it thick—hard to take a breath around it. The name Elizabeth Edwards has chosen for her book is an odd one, because the word resilience, according to my dictionary, means “an ability to recover from or adjust easily to misfortune.” Elizabeth Edwards is plucky, courageous, even gallant. But resilient? No, not really.

She and John survived the death of their son together—couples often don’t—and went on to have two more children. Elizabeth Edwards gave up her law career and became the mom-in-chief, to borrow Michelle Obama’s term, and her husband’s biggest booster. No one wants to make a feminist parable out of desperate longing and loss, but giving up one’s life leaves one vulnerable (this is where she is precisely the opposite of Hillary Clinton). Elizabeth Edwards began to put herself second, way second, so second that she didn’t look after her own health, didn’t have that annual mammogram. Too busy, she says, with the kids and the campaigns. Then came the cancer, diagnosed just as her husband’s run for the vice presidency came to an end in 2004. There is a strange, maddening quality to this appealing woman and her inability to make way for her own needs. One has the sense that she got knocked off her pins so early by the death of her son and by the drive to replicate a family in his place that she got lost a bit. She admits to a terrible insecurity as she hit the national stage, as everyone responded to her. So all the while that we were admiring her for being a natural, she was fighting her self-doubts along with those pounds. This makes her even more real, more resonant, to a vast public and not only to Oprah-watching women.

We know what happened next. As he launched his 2006 presidential run, John confessed that he had had a recent one-night stand with a woman who cornered him outside his hotel room with the line “You’re so hot.” This corny come-on appears and reappears as Elizabeth Edwards tries to deal with her husband’s willingness to tumble out of his vows and into bed with someone who could talk so silly. But it wasn’t the whole truth. A year later he admitted there were more nights; the indiscretion was an affair. The woman had a baby. Edwards doesn’t write about that, but we know and we know she knows that we think her husband is very possibly the baby’s father and that if she leaves this earth, that paternity will be established. This slender book feels like her preemptive strike to keep that from happening, to so shame her husband that he will not make a new family with this woman and child after she is gone. Those who have said she wrote it out of a need for revenge are missing the point. She is trying to prevent something from happening, not punish her husband for something that has already happened.

On her publicity tour through the country, Elizabeth Edwards has received a fair amount of castigation. I suspect many of her critics have not read the book because you come away from it with such a heavy heart, such a sense of a once-blessed life pushed to the edge, that being angry with its author is trivial. She had to write it, or she would have jumped out a window or stayed in a fetal curl of grief. It is her railing against the injustice of what has befallen her and the prospect that she will not be around to see her children grow up while their philandering father hangs around on the planet. Which only makes it all the sadder.