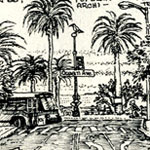 While small, and just one panel of an eight-panel pictoral project, this map has enough information to fill fifty guides. It’s the Los Angeles part of Bob Waldmire’s fantastic cartographic wonder depicting historic Route 66 from the land of Lincoln (whose portrait adorns the beginning point) to L.A., where Jim Morrison of the Doors stands for the City of Angels. This slice of the panorama has details where the old highway passes through Claremont, LaVerne, San Dimas, Glendora, Azusa, Duarte, Monrovia, Arcadia, Pasadena, Los Angeles, and Santa Monica. The legendary Route 66, sometimes called the “main street of America,” had its beginnings in November of 1926 and has captured the hearts of Americans who love to drive.

Waldmire was a walking encyclopedia of landscape, including information on the flora and fauna, while drawing brilliant descriptions of wildlife along with offbeat renderings of historic and geologic sites. He was a gifted graphic artist who described in fine detail the feel of the places with respect and a gentleness that demonstrated his love for the open road. Bob Waldmire certainly knew his subjects first-hand, as he traveled from his home in Springfield, Illinois across the country in his trademark 1972 VW microbus, sketching as he went, creating stunning pictorials of 34 cities and countless other subjects including his beloved Ford Mustang, birds of the southwest, and even his own liver, which gave out in 2009 as a result of cancer. Yet Route 66 was special to Waldmire and he even created a center for the historic highway in Hackberry, Arizona and was eventually given the John Steinbeck Award from the National Historic Route 66 Federation for his years of dedicated service.

I had the pleasure of chatting with Bob Waldmire a couple of times. We shared our admiration for pictorial mapping, American muscle cars, local history, and the Grateful Dead. When he had his final art show at the Lazy Dog Drive-In in Springfield, people came from all over the country to express their appreciation of his work and love for a very cool guy. The lyrics to the classic song “Get Your Kicks on Route 66” go, “Flagstaff, Arizona don’t forget Winona…Kingman, Barstow, San Bernardino…would you get hip to this kindly tip and go take that California trip…get your kicks on Route 66.” On Waldmire’s map we get an extra two dozen verses.