Home Uncategorized The San Diego Fires: What We Know 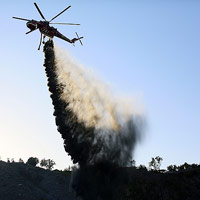 On Wednesday, Governor Jerry Brown declared a state of emergency when dry conditions and blistering temperatures led to multiple fires in the San Diego County area. The blazes have consumed more than 9,000 acres, destroyed several homes, and prompted thousands of evacuations.

The cause of the wildfires remains under investigation, but San Diego County Sheriff Bill Gore said that the brittle, dry conditions of Southern California are a primary culprit; grasses in the area are so parched that even a small spark could set off burning, he went on.

According to reports, the first fire to breakout was the Bernardo fire on Tuesday, which blackened nearly 1,600 acres of brush. As of this afternoon, it has been 75% contained. Wednesday morning, a fire dubbed the Tomahawk fire broke out near Camp Pendleton, a Marine Corps base in northern San Diego County. The fire burned westward, causing employees at the San Onofre nuclear power plant and residents of Pendleton to evacuate. Since then, Cal-Fire spokesman Daniel Berlant reported that firefighters have faced 36 infernos over the course of the past two days, reducing the number to eight this morning after the majority had been mostly contained. But the tinderbox conditions and rising heat wave—today’s temperature alone is topping out at nearly 100 degrees—haven’t made matters any easier.

The remaining fires continue to eat through the county. According to several reports, one inferno near Poinsettia resulted in the evacuation of thousands of residents in Carlsbad from more than 11,000 homes, schools, and businesses. San Diego Gas and Electric also reported that an estimated 2,000 residents in Carlsbad were without power and that several homes were lost.

The fires have also had a devastating effect on traffic. Times of San Diego is reporting that blazes at Pendleton shut down Interstate 5 when flames burnt about 100 acres near the freeway. A small brush fire also closed a portion of the 405 Freeway in the San Fernando Valley, and in Ventura County, a brush fire caused the temporary closure of California 126 west of Santa Paula. It burned about 30 acres before it was contained.

One of the worst fires is located in San Marcos, which has been troublesome due to changing wind patterns. Today, officials are reporting that only 5% of the blaze had been contained; it burned through 800 acres this morning, causing the closure of multiple schools. Evacuation orders on Wednesday for several neighborhoods in San Marcos caused at least 350 residents without alternative housing to stay in shelters.