Home Uncategorized The Rundown on The 2014 L.A. Marathon 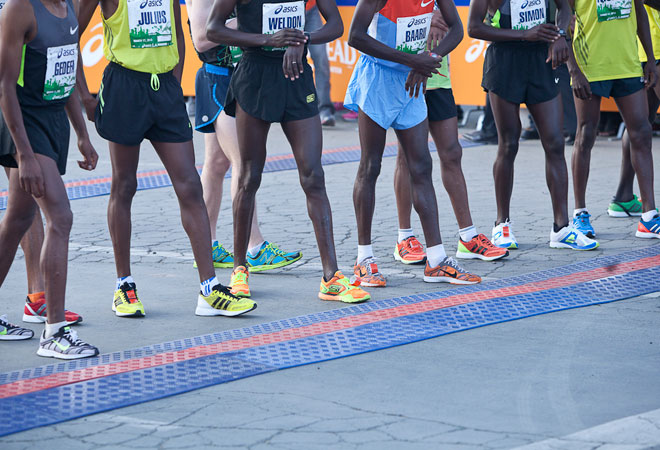 Four cities. Twenty-five thousand runners. Twenty-six-point-two miles. One race. As the new CEO of the Asics LA Marathon, Tracey Russell manages Los Angeles’ largest annual athletic event. She took a break from gearing up for the March 9 race to tell us how the marathon is put together, what it needs to become one of the nation’s best, and how one day of worse-than-usual traffic brings Angelenos together—really

From pulling permits to working with the different municipalities involved, what’s the biggest challenge to pulling off the marathon’s “Stadium to the Sea” course?
I don’t know that it’s a challenge. It’s great to work with four cities—Los Angeles, West Hollywood, Beverly Hills, and Santa Monica—and the VA to make sure things run smoothly, but there is more work to do because it’s not the same team coordinating all 26 miles. We couldn’t do it without the support of those cities.

It can’t be easy keeping each city’s resources straight. How do you manage it? Lots of Tylenol?
Well this is my first L.A. marathon, so I haven’t done it yet, but the course has been here for four years and the different jurisdictions have made things work really well. The 2013 event—the most successful ever—speaks volumes about how well all the different players come together from an operational perspective.

As a new Angeleno, does organizing the race impact how you’re learning about the city?
Yes! I was going brunch with friends yesterday and thought, Oh cool, I’ll be near mile 17. Mile by mile, that’s how I see things. The course has been my compass.

What makes a marathon “top-tier”?
What marathons do people—runners and non-runners—talk about? Boston, New York, Chicago. We want to be in that same sentence.

Why do you think we’re not in that sentence yet?
We have an awesome course and a great destination, but right now a lot of our participation base is from Southern California. There aren’t a lot of runners who travel the globe running marathons that pick L.A. to be a destination.

Why not?
With so many attractions here we have an opportunity to further sell Los Angeles as a destination marathon. Other cities have done that well. That will yield progress over time.

Why is it important for a city to have a marathon at all?
If positioned well—which is our opportunity here—a marathon is a great stage to showcase a city. But there are also people in Southern California that, because of all the traffic, haven’t seen certain neighborhoods or run down certain roads before.  It provides people a way to experience the city in a new way. More importantly, it becomes an aspirational health and fitness goal. People say, “running the Asics LA Marathon is on my bucket list.”That gets them engaged in the sport of running, and then we provide them with a great experience.  Hopefully they do the event and say, “my life’s better now that I’m running.  I’m eating better and I’m a better employee or husband or mother or father or partner.”

We also provide a platform for people to raise money for so many amazing causes here in Southern California. It’s a win-win-win for Los Angeles, a huge community and civic asset.

Despite all those benefits, the event has at least one downside: it causes major traffic jams. What do you say to people who gripe about that inconvenience?
This isn’t just for the person you see running by. It’s for so many people and so many amazing causes. And it has financial impact for the city. We bring in people from all over the US and the world who spend money and help our city be better through the dollars they spend. We already know that we’re filling up to close to 5,000 hotel room nights.

What does it cost the city to host the event?
It’s all our expense.

Does Asics LA Marathon make money?
We’re not making any significant dollars. We’ve netted on the positive side, but nothing that’s a significant amount.

I have to imagine security costs—and needs—have gone up this year.
Yes, in our budget for this year’s race we increased safety and security personnel up from last year.

Was that in reaction to the Boston Marathon bombing, or has the overhead rate simply increased?
Year over year expenses go up, but we additionally and intentionally budgeted for an increase given what happened in Boston.

So what extra security steps are being taken then this year?
Safety and security is our number one priority. The cities [we work with] are the safety and security experts, so it is in our best interest to work collaboratively with them to determine what additional resources are needed for this year’s race. I feel we’ve got incredible support from and partnerships with those who work in safety and security every day in the cities the course goes through. I’m confident they know the best plan we need to have in place to ensure a safe race.

You’re an athlete yourself. What’s special about running in L.A.?
It’s not freezing in the winter and not too humid when it’s summertime! I grew up in Cleveland, and I don’t know that I would have started running in January if I lived there. Our year-round weather supports the sport. I think that’s awesome.