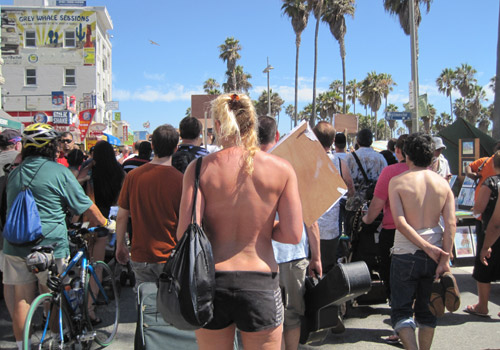 Odd sights are a dime a dozen at Venice Beach, but this one held its audience captive. On Sunday, over 20 topless women (wearing red tape over their nipples to avoid arrest) strolled the boardwalk demanding the right to bare their chests. Dozens of men in red bikini tops and clothed participants walked in solidarity.

The protest, sponsored annually by GoTopless.org in honor of Women’s Equality Day (the anniversary of 19th amendment ratification), also took place in San Francisco, New York, Chicago, Miami Beach, Austin, Seattle, Denver, and Oahu. Of those, New York, Hawaii, and Texas are among the five states and handful of cities that allow “topfreedom” in the US.

Protestors met at the corner of Ocean Front Walk and Navy Street, chanting “go boobies, go boobies, go” down the street. Local resident Cindy Schiffris, who heard about the event on Facebook that morning and decided to attend for the sake of “equal rights” and “even tan lines,” followed on rollerblades. As people snapped photos and posed with Schiffris, she accepted the attention calmly. “I think it’s gonna by exciting to see tits anywhere, right?” she said.

Male protestor Keith Webber said he thought that people would eventually acclimate to the sight of bare breasts in public. “I think it’s just a cultural thing. I don’t think people would be topless everywhere; men aren’t allowed to. But in some places like the beach where it’s natural to be topless, I think women should have the right to do so.”

Eventually, the crowd gathered for a couple of performances. First, a woman wearing more butterfly clips in her hair than pieces of clothing performed a tribal dance to a clucking crowd. Things got loud when a woman in unfastened white cargos, a cap, and mini images of herself on each nipple started dropping rhymes. “I’m sittin’ here and wishin that I didn’t need permission to take off my top, take off my top,” she rapped. “Equality for the T-I-T’s, a little respect for my chest, PLEASE. Tolerate feminine boobies, areolas long to feel the BREEZE!”

Then a woman in a white skirt, hat, and sunglasses recited literature from the Go Topless Web site. Every time she called out “That’s right, ladies!” and dipped her hips or giggled, it became harder to take the event seriously.

Huntington Beach residents Gloria Rye and her young daughter, Sydney, watched with restrained amusement from afar. “It’s a little over the top for us,” she said. “We would not be walking around with our shirts off. But it’s humorous, and it’s fun to see all the guys with bathing suit tops on.”

If the event seems wonky, maybe that’s because its founder is also the leader of Raelism, the largest UFO religion in the world which posits that Earth was created in a lab by extraterrestrials and whose supposedly peaceful symbol is a swastika trapped in a Jewish star. Maybe affiliating with Raelism is GoTopless’ reverse psychological approach. Once you investigate the zany world of Raelism, bare breasts start to seem like no big deal.