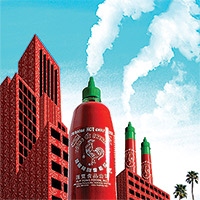 We’ve reached that month when our freeways become conduits for a culinary miracle: Thousands of semis struggle south from freshly picked fields in Ventura and Kern counties, their steel-mesh trailers brimming with crimson peppers that glint in the late summer heat.

The exodus won’t be complete until the last of the approximately 243 million jalapeños—about 58,000 tons—reach the Huy Fong Foods plant in the city of Irwindale. There they will be crushed to become the key ingredient of nearly a year’s worth of sriracha hot sauce.

Given the global demand for sriracha, Huy Fong owner David Tran must carefully monitor these massive but still limited resources. “At the end of the season we know how many tons we have on hand,” says Tran, who took his recipe for garlic-chili sauce when he fled Vietnam after the Communist victory and turned it into an $80 million business. “We can then divide the jalapeño evenly every month until the next season. My customers want to order more, but we just limit the volume every month.” Pass the sauce: David Tran produces nearly a year’s worth of sriracha from the end of summer chili harvest. Photograph by Jonathan Alcorin/Corbis

The sriracha shortage would have turned catastrophic had Governor Jerry Brown not helped persuade Irwindale’s city council to end its war against Huy Fong three months ago. In the fall of 2013, the council filed a lawsuit alleging that jalapeño fumes were causing watery eyes and burning throats among some residents. In mid-May, two weeks after Toyota announced it was moving most of its North American operations from Torrance to the Dallas suburb of Plano, an upbeat Texas delegation visited Huy Fong headquarters and Texas governor Rick Perry tweeted a come-hither.

Of course Toyota’s business model isn’t predicated on minimizing the shipping costs and delivery time of 58,000 tons of chili peppers. As it happens, the Texas climate is positively hostile to jalapeños. “Chili production has been shrinking in Texas because their weather is far more variable than ours,” says Craig Underwood, whose Underwood Ranches has supplied Huy Fong for the past 25 years. “You have extremes of temperature, hurricanes in the south, and tornadoes in the north.” In 2011, the entire state produced 8,000 tons of jalapeños, less than a sixth of what Tran alone purchased this year.

Tran stayed put, the city has withdrawn its lawsuit, and a new carbon filtration system has been installed at the Irwindale plant. We’ll have to wait until next month to see whether the four or five families who complained in 2013 can make it through this chili-crushing season without crying. As for those legions of local food bloggers who feared that L.A.’s greatest condiment might abandon its birthplace, the 2014 season can bring only tears of joy.