Home Art The Problem With Foster The People’s “Public Art” 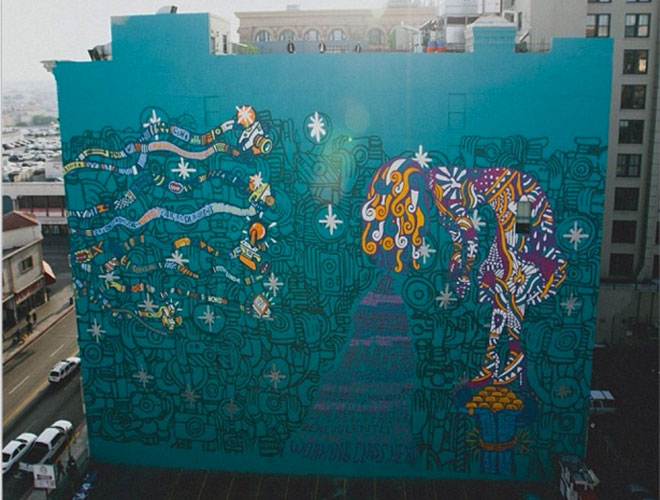 If you are up to speed on this week’s local art news, you know that a downtown mural affiliated with the L.A. band Foster The People has kicked up some controversy. The mural, which stretches 125 by 150 feet, has been up since January and was created to promote the group’s sophomore album, Supermodel. Why is it making headlines now? Because the owner of the building it adorns has wanted the mural taken down for months, it isn’t registered, and mayor Eric Garcetti has granted it a stay of destruction.

Is the mural a legitimate entry into the Los Angeles public art canon, as Foster the People claims, or is it a misrepresentation of what public art can and should be in this city? I’ve been wondering this as the story unfolds. Here’s what to consider:

The Artist: The piece was completed in January by Young & Sick, the hybrid music/art project of Dutch native and L.A. resident Nick Van Hofwegen. Y&S also created the artwork for Foster the People’s first album, Torches.

The Style: It’s kind of like an Aztec tribal print paired with Sumi Ink Club doodles. What does that say about the work? That it’s a mishmash of styles, and that’s about it.

The Subject: Alluding to the title of the album, the artwork features paparazzi hands in pursuit of a stylized model. From her hair spills a poem about the “beautiful” challenges of celebrity. (You can read the the poem in full on Wikipedia.)

The Intention: Mark Foster, the lead singer of the band, says the mural is an artistic gift from the band to city. “I live a block away from the mural,” he said. “I feel like Los Angeles has given us a lot, and we wanted to give something back.”

The Location: The mural is blocks from Skid Row, at 539 S. Los Angeles Street.

The Activation: Foster The People performed in front of the mural after it was completed. Tickets to that secret concert were distributed from MOCA. In London, fans helped paint a similar mural promoting Supermodel.

The Drama: Perhaps unwittingly, Foster The People did not obtain the proper permitting for their mural in advance and, because the building it is on is owned by someone else, it is not protected from being painted over. Somehow, it survived until now and the band has invoked the power of LA Freewalls (who helped complete the mural), the Los Angeles Times (who interviewed the band and wrote a story detailing the mural’s situation this week), Change.org (where 12,000 Foster the People fans backed their cause), and Eric Garcetti (who stepped in, ultimately saving the piece) in order to preserve it–for now.

My verdict: Despite the high-profile names fighting on its behalf, the mural isn’t public art. It’s artistic advertising. Foster the People has taken advantage of L.A.’s controversial mural ordinance, and Garcetti, disappointingly, bent to celebrity influence. But the mural may not stay up forever. The band still needs to acquire those permits, and I’m willing to bet they delay the process until the Supermodel promotion has ended and they’ve targeted another free wall to advertise on. I’m guessing that update drops early next year.