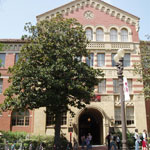 Party People Take a Seat
A good old-fashioned sit-in has been organized following what USC students are describing as an “overly aggressive” LAPD response to a party near the college, at which six people were arrested—one on suspicion of felony interfering with the work of police officers and five for failing to disperse. According to officials, officers used force and requested backup because one partygoer was resisting arrest and others had starting throwing things at them. They confirmed to the Los Angeles Times that a number of complaints, including allegations of racial profiled, were filed against officers following the party bust. The sit-in is taking place until 4 p.m., giving anyone who participates two hours to make it to the Ronald Tutor Campus Center Ballroom by 6; the LAPD will join the school’s Department of Public Safety for a discussion about the incident then.

New Marijuana Dispensary Law (Puff Puff) Passed
The California Supreme Court has decided cities have the right to outlaw medical marijuana dispensaries. Where medical marijuana is distributed and how it is regulated has been a subject of continuous debate since Proposition 215, which was dubbed the Compassionate Use Act and essentially legalized the use of marijuana for medical purposes, passed in 1996. (Note: marijuana remains illegal under federal law.) This latest ruling is expected to provoke protests at local dispensaries this week.

In Development: “The Real Mayoral Losers of LA?”
Councilwoman Jan Perry and her former opponent in the mayoral primary, ex conservative radio talk show host Kevin James, seem to have bonded over more than their mutual endorsement of mayoral hopeful Eric Garcetti of late; Daily News staff writer Rick Orlov reports the new “friends” are looking to develop a talk show, either for a local or national broadcast. “”It would be pretty funny with him as a white, gay Republican and me, an African-American woman, talking about issues,” Perry said. We have to ask: Didn’t L.A. audiences already change the channel on that programming?