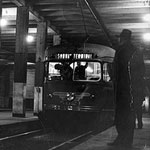 It’s the End of the Line for Subway Stiffers
The days of slipping through the turnstiles at Union Station without paying subway fare came to an end this week, when transit officials locked the gates to riders without a TAP card. Authorities plan to lock the turnstiles at 15 other Red and Purple line stations by summer’s end. Enforcing subway fares should net the MTA an extra $7 billion in revenue—$1.50 at a time.

Antonio Villaraigosa’s Westward Expansion
Where do you go from Getty House? Venice Beach, if you’re outgoing city head Antonio Villaraigosa. The two-term mayor told KPCC’s Air Talk he is moving to the beach town when he leaves office at the end of the month (Eric Garcetti will move into his former digs in Hancock Park). “I love that part of the city,” he said, “and it’s always been a great supporter of mine. I’m going to probably affiliate with a university or think tank, maybe do a little public speaking, since I have turned down a lot of requests over the years. Then I want to do a listening tour.”

Throwing Down the Plastic
The city council voted 11-1 this week to prohibit stores that sell perishable foods from handing out plastic grocery bags. Stores will be required to charge 10 cents for paper bag. The law, designed to reduce waste and encourage the use of reusable bags, will take effect on January 1, 2014 for stores making more than $2 million a year, and in July 2014 for smaller businesses.

Car Crash Conspiracy
The Federal Bureau of Investigation today shot down speculation that Michael Hastings, a journalist who died when his vehicle hit a tree in Los Angeles on Tuesday, was under investigation at the time of death. Hastings was reportedly researching a story about Florida socialite Jill Kelley’s lawsuit against the bureau and the Department of Defense in recent weeks.