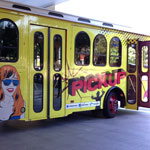 It hasn’t debuted yet and already we don’t know how West Hollywood ever got by without it: a new, free evening trolley that offers bar-goers (and everyone else) a safe ride down Santa Monica Boulevard on Friday and Saturdays nights. With stops every two to three blocks and service from 8 p.m. to 3 a.m., the new mode of transportation, dubbed “The PickUp” aims to ease traffic on one of West Hollywood’s busiest streets and also to provide an easy to use and cost-effective (not to mention legal) alternative to drinking and driving. Members of the media were treated to an inaugural ride on Friday, when city officials debuted the pop-art inspired shuttles, which will feature custom playlists put together by DJ Derek Monterio and photo booths on board. Set to officially launch this Friday, the program has been paid for by money in the City of West Hollywood’s general fund and is set to run for a six-month period, during which local bars and restaurants including The Abbey, Micky’s, Hugo’s, and Fubar plan to offer patrons who use it discounts and specials. City officials are as excited to debut The PickUp as we are to hop on it. “It’s a very exciting adventure,” said councilman John D’Amico at the media event. “It puts us on the map in a new way.”