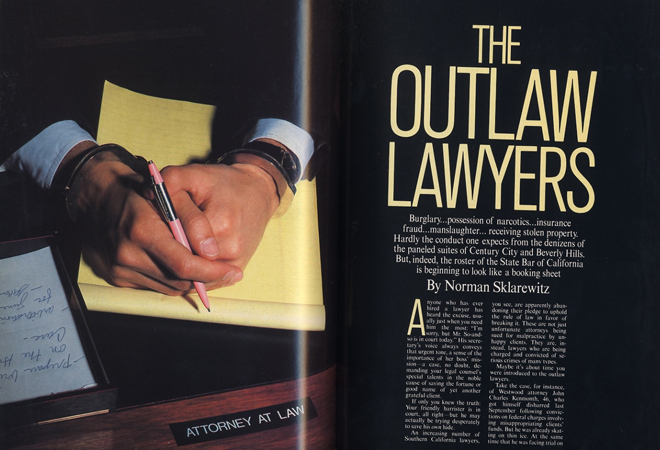 A Most Common Crime

Burglary…possession of narcotics…insurance fraud…manslaughter…receiving stolen property. Hardly the conduct one expects from the denizens of the paneled suites of Century City and Beverly Hills. But, indeed, the roster of the State Bar of California is beginning to look like a booking sheet.

Without question, the most common crime committed by Southern California attorneys, often with the help of a select group of physicians and chiropractors, is insurance fraud. Together, they locate people who will claim to have suffered car-accident injuries, then arrange for fictitious medical treatments. Claims are sometimes kept on the modest side, on the gamble that insurance investigators are too busy to check every claim for $1,500. But when monthly proceeds from all the fraud-ring operations are totaled up, the amounts are staggering.

That old cliché about “partners in crime” rang true in the case of Robert K. Petty of West Covina and Otis G. McGray of Granada Hills. They had a law firm on the 3800 block of Crenshaw Boulevard; both specialized in criminal law. But a grand jury heard evidence and saw 120 exhibits that indicated the two also ran an insurance-fraud racket. As usual, it involved fake accidents followed up with fake insurance claims. The two partners were hit with 45 counts of forging signatures—of accident victims, of doctors and of just about anyone else needed to set up a claim file. The charged were eventually reduced to two counts of grand theft and one count of forgery each. Both pleaded no contest; and though they faced from up to 10 years in prison, each ended up with a two-year suspended sentence and probation.

Then there was Joseph Truman Vodnoy, a graduate of the New England School of Law in Boston. Vodnoy had his offices—advertised prominently in the Yellow Pages—in the Civic Center Tower building on 2nd Street downtown; from them, he operated a practice that mainly involved cheating insurance companies. Vodnoy’s method was simple: He would have contacts steer auto-accident victims to him, and then he’d develop a case against the insurance company.

A grand jury indicted him on multiple accounts of grand theft and conspiracy to cheat and defraud. He pleaded no contest to the one conspiracy count (as part of the deal, the other counts were dropped). His six-month jail term was suspended, and as a condition of probation, he was ordered to provide free legal services to the Western Law Center for the Handicapped.

One barrister who actually made it to county jail recently was Dewey P. Humber, 34, who did a year for violation of probation. It seems that originally Humber had been charged in an elaborate insurance-fraud caper. The grand jury alleged, among other things, that he set up fake claims against insurance companies for treatments his clients never received.

Humber was found guilty, with judge Nancy B. Watson commenting that she found the violations “involved multiple victims, substantial amounts of money, professionalism, planning and premeditation.” He was sentenced to state prison and did some time, but then he received a suspended sentence and probation. Conditions of the probation were that he stop practicing law, remove his sign from his office and not even rent space in any building he owned to another lawyer or doctor. However, investigators subsequently found that Humber was not only back in his old law offices but had resumed filing insurance claims as of yore, using some law-school students as fronts. Since that was exactly what the judge had intended to prevent by the condition of probation, Humber was packed off to the pokey.

But it wasn’t fake insurance claims that got Beverly Hills attorney Marshall Bitkower, 38, into his recent trouble. In fact, he had been quite successful in representing his clients on personal injury claims, according to the district attorney’s office. “His clients were real and they had real needs,” says a D.A. official. The problem, according to the 32-count indictment, was that Bitkower had negotiated settlements with the insurance companies and collected the money—but then allegedly kept it for himself.

You are sentenced to…

Loss of one’s license to practice law in California is the most severe punishment recommended by the state bar. If the recommendation is accepted, disbarment is ordered by the California Supreme Court, and at that time the attorney is expelled from the legal profession and must discontinue the practice of law; his or her name is stricken permanently from the roll of attorneys. He or she can seek reinstatement after a five-year waiting period, but such a petition is rarely approved by the state Supreme Court.

The next, lower level of disciplinary action that the state Supreme Court can take is suspension, during which period an attorney may not practice law. Suspension may be for a set term or until certain conditions are met, such as making financial restitution to a former client or taking and passing a so-called ethics examination consisting of 40 multiple-choice questions that test the applicant’s knowledge of the rules governing professional and judicial conduct. (Curiously, this is the same exam that the lawyer had to take—and pass—as part of his or her original tryout for the suspension.) Probation might also be ordered in addition to, or in place of, suspension. An attorney on probation can continue to practice law.

When an attorney is suspended or disbarred, he or she is usually required, among other things, to notify clients and opposing counsel in pending cases of disqualification to act as an attorney, and the lawyer also must return unearned fees. Enforcement, however, is a different matter entirely. The state bar admits that follow-up supervision of errant attorneys is less than satisfactory; a special bar committee, noting “the inadequacy of the present system of probation” for attorneys, has recently made corrective recommendations.