Home Uncategorized The New Toll Lane On The 110 Might Just Drive Us Over... 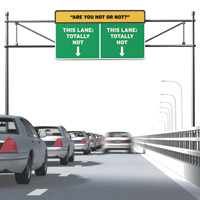 The Arroyo Seco Parkway—also known as the 110, the first freeway in the western United States—opened in 1940. Angelenos have since considered it their birthright to roam the region with the sort of financial freedom that toll-paying East Coasters couldn’t dream of. It didn’t take long for our population boom to put a speedy end to fast-moving roadways. After decades of watching freeways grow ever more packed, Caltrans and the Metropolitan Transportation Authority quietly began laying the groundwork for the November 10 debut of a toll lane along 11 miles of the 110 freeway between downtown and the 91.

Just the idea of a toll lane in a land ruled by freeways is jolting enough. Worse is the slap to carpoolers who’ve enjoyed having the diamond lane mostly to themselves. The lanes evolved to eventually reward drivers with low-emission vehicles as well. Now anyone can win access by shelling out dough. In theory the rates—which fluctuate depending on congestion from 25¢ to $1.40 a mile—will motivate people to carpool (that’s why the lanes are labeled High Occupancy Toll, or HOT). The plan also includes rolling out 14 miles of toll lanes on the 10 freeway. That’s being hopeful, especially considering that in Orange County the masses have been unwilling to pay a premium to glide along the roads there.

We can be sure that in Los Angeles, a city of dire economic inequalities, plenty of drivers will remain stuck in the free lanes watching a stream of cars slip by, a transponder on their windshield ringing up the tolls as they pass. If the new HOT lanes do go over well, that’s a conundrum, too: Few things are as maddening as sitting in a clogged carpool lane. But if time is money, will there be refunds?