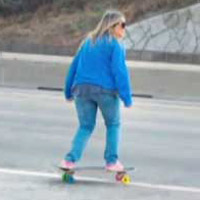 Bill Rosendahl Returns to City Hall In Time To Vote On Medical Marijuana
The councilman, an medical marijuana advocate, has been undergoing treatment for cancer.
[LADN]

Missing 4-Year-Old Boy Found Perfectly Safe
This one has a happy ending.
[CBSLA]

Drew Barrymore Has a Baby Girl
The actress named her first-born Olive.
[People]

While You Were Avoiding the 405, Cindy Whitehead Was Skateboarding On It
Seven others, including lost tourists, also made their way onto the freeway.
[LAO]