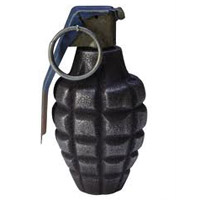 Endeavor’s Departure Delayed
But the space shuttle is still scheduled to arrive in L.A. on Thursday.
[LAT]

Mitt Romney Campaign Stops at the U.S. Hispanic Chamber of Commerce Convention in L.A.
The republican nominee for president said he’s tackle immigration reform in his first year and avoided pulling a Newt by insulting the Spanish language.
[NBCLA]

Coptic Christian, Muslim Leaders Speak Out About Anti-Islam Film and Overseas Protests
Things the religious leaders agree on: The movie and the violent response to it=two wrongs.
[KABC]

Live Grenade Found in Late Vet’s Santa Monica Garage
Quite the surprise for the apartment manager who cleaned out the space.
[CBS LA]

LAPD Chief Charlie Beck Is Back to Work
Turns out he broke his collarbone in a motocross accident last week.
[LADN]

Eric Stonestreet Heckles Heckler
The Modern Family actor got into it with a St. Louis Cardinals fan at Dodger Stadium on Saturday.
[LADN]

Rick Caruso Still Suggesting He Maybe Sorta Wants to Be The Mayor
This can only go on for a few more weeks, as the deadline for entering the race is nearing.
[LAT]

Reese Witherspoon Would Like $10M For Her Ojai Ranch
She got married there. Rob Pattinson hid out there.
[People]