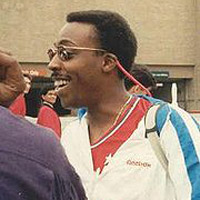 Rodney King Autopsy Conducted
A community vigil is planned for this evening in Leimert Park.
[KABC]

Suspected Drunk Driver Kills Two in Collision With Food Truck
The driver, a 37-year-old from Upland, was speeding away from CHP officers.
[NBC LA]

Free Wi-Fi Coming to LAX
Who gets the contract is somewhat up in the air, ba–dum–bump.
[Daily News]

Lancaster Boy Found Hanging By Karate Belt In His Backyard
This tragedy is looking like an accident.
[LAT]

Major Leaguer Roger Clemens Found Not Guilty of Lying To Congress
For the record, the jury was “largely uninterested in baseball.”
[KTLA]

Kobe Bryant and Paul Gasol’s Horse Siempre Mio Loses By a Nose at Hollywood Park
They went in on the gelding together a charity auction.
[ESPN LA]