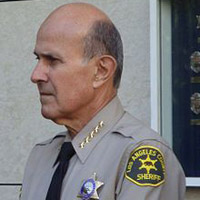 Laker Jordan Hill Charged With Choking a Family Member
The forward is this week’s Most Violent Laker.
[NBC LA]

Ruling: Sheriff Lee Baca Can Be Sued for Jail Violence
“Deliberate indifference” has its day in court.
[LAT]

Mr. Kimmel Went to Washington
See which celebrities went with him.
[KABC]

Romney: ‘Even Jimmy Carter’ Would Have Killed Bin Laden
That’s where the campaigns are right now.
[NYT]