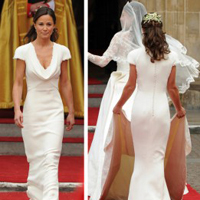 UC Davis Police Chief Put on Leave Pending Investigation
We’d go on, but this photo is worth about a million words.
[The New York Times]

L.A.’s “Most Prolific Serial Killer” Charged For 4 More Murders
That makes it 14 for Chester Turner.
[LAist]

Pippa Middleton’s Royal Wedding Attention-Stealing Bridesmaid Dress is on Sale
Her royal wedding attention-stealing tush, as far as we know, is not.
[People]