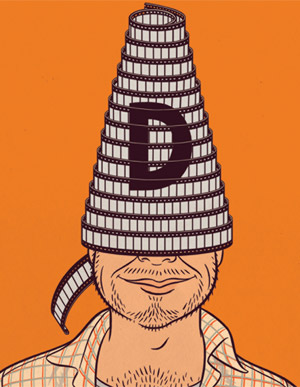 They have become a staple of summer entertainment—the dude flicks. There already has been a spate of them, starting in June with the breakout hit The Hangover. The formula is the same: A group of males engage in a host of acts designed to gross out the audience with an ever-escalating display of bodily functions and crude jokes. They vomit, fart, urinate, masturbate, performing essentially for one another and, they hope, for a huge target audience of guffawing teenage boys—of whatever age. No question, the formula is working and has worked for years, dating back at least to 1982’s Porky’s.

For a long time I didn’t pay much attention to these movies. They seemed dumb and dumber, and they weren’t exactly aimed at me. Occasionally one did have charm and did make me laugh. There is a difference, say, between the silly-yucky 1999 American Pie, in which a bunch of boys try to unburden themselves of their virginity (in the famous scene, one of them has sex with a pie), and the winsome Something About Mary, which came out the year before and sported an actual female lead in Cameron Diaz.

But something has happened to me. My tolerance has been strained. Perhaps I am finally listening to what is or is not being said. I sat through The Hangover hardly cracking a smile. I found myself irritated. Why should a bunch of quasi-adult males go off on such a ridiculous, vulgar spree—a spree that includes peeing in public, simulating sex with an animal, and ogling a woman’s “rack”? Why is it funny when grown men behave like sub-adolescents? The movie reflects a tacit retro strain in the culture that says boys will be boys, that they are allowed to behave that way. This is all just a bit of male fun. Leave them alone. It’s a tough old world out there, and guys need to let off a little steam every now and again. That’s the implication. They also need to get away from women—their wives, their girlfriends, their mothers, the controlling she-devils of antifeminist lore. Enough already. Can’t a guy go to a little bachelor party with his friends and get wasted and do anything and everything he wants with animals and strippers? Lighten up, won’t you?

I’ve heard that phrase “lighten up” most of my life, whenever I failed to laugh at some joke, usually one that was demeaning to women, something to do with body parts or sex acts or female deficiencies. It was always said with a smile or a condescending shrug. The worst that could be said was that you had no sense of humor, that you were a prude. Relax. It’s just a joke. I know some mothers who have taken their sons to dude movies as a bonding experience. At one point I thought they were cool, proving their postfeminist hipness, their ability to laugh at the raunchy side of life. Now I think it’s weird, corny, disturbing. After all, what messages are these movies sending—about women and, more tellingly, about men?

The female characters—surprise, surprise—are classic stereotypes. Take your pick: the prostitute or the mama figure. Better yet, patronize the former, run home to the latter. It is the view of men, though, that is more unsettling, sad even. They are an arrested-development lot of the swaggeringly insecure, men scared of women—except for hookers and inflatable dolls (and the random animal or apple pie)—men who take refuge in the shelter of buddydom. Bros, pals, buds. The only affection visible in most of these movies is among the guys, expressed often in backhanded insults but unmistakable. There is a kind of desperate macho camaraderie that does nothing to hide—in fact, it highlights—that male insecurity. Maybe that’s why men laugh so loudly at these films, particularly young men, because they get it: Underneath the nasty one-liners and the debauched behavior, what these movies are about is a kind of terror, sexual and otherwise. Maybe that’s why some women can laugh at them as well, despite the misogynistic stuff. They, too, get it—that these onscreen posses are full of more fright than malice. We live in a culture where every other TV ad seems to be for Viagra or some erectile dysfunction pill, all aimed at the performance anxiety of the American male—and not just old ones. The dude films—and this is the best one can say of them—go right to the heart of this anxiety.

In her 1999 book, Stiffed, Susan Faludi talks about what she calls the “masculinity crisis” in this country, that men feel threatened by all manner of things: the swings in the economy, the loss of jobs and job security, and yes—though Faludi doesn’t want to go there—the rise of women. No question that “crisis” has played itself out in the culture over the last decade or two and no more so than today, and these guy films are emblematic of what’s been going on. We have reached a point where our leading men now are anything but secure, men like Seth Rogen, the fumbly, pudgy costar of Knocked Up and the new Funny People, writer-director-producer Judd Apatow’s more tender contributions to the genre. Rogen is no Cary Grant or George Clooney, men who exude a male confidence and a flirtatious ease around women. He is a slightly clueless teddy bear who gets the beautiful girl by default simply because he gets her pregnant. He is a sweetie pie, a mensch, a slacker with a goofy heart who grows up by moving on from his buds and stepping up to his paternal responsibilities.

Even as the boys of summer have been doing their silly, often ugly thing, we have at the helm of the land an exemplar of the ultimate evolved male, a president who schedules dates with his wife and says that he loves living above the family store so he can have breakfast with his daughters and put them to bed at night. There has been a sea change in the hearts and minds of many men, a decisive shift in their attitudes toward women, toward fatherhood, toward themselves. One should not therefore overblow the success of these movies—or be too dispirited by them, or so I tell myself—because in the last 20 years a lot of men have changed a lot.

Of course, inequities, economic and otherwise, remain. Too few women have risen to the top—in business or in government—because we haven’t yet figured out the crucial piece: how women can have kids and still stay competitive in the workplace. That said, we live in a dramatically reconfigured world when it comes to gender roles. I see around me so many good men, secure men, men who wouldn’t dream of going to an X-rated bachelor party in Vegas, not because it would be demeaning to their brides but because they themselves would feel demeaned. They are not wimps, either. They are partners in their marriages and in the raising of the children. When I look back at my childhood and the autocratic father-knows-best men who were the norm, I am stunned at how far we have come, even though too much of pop culture is still stuck in the frat house.