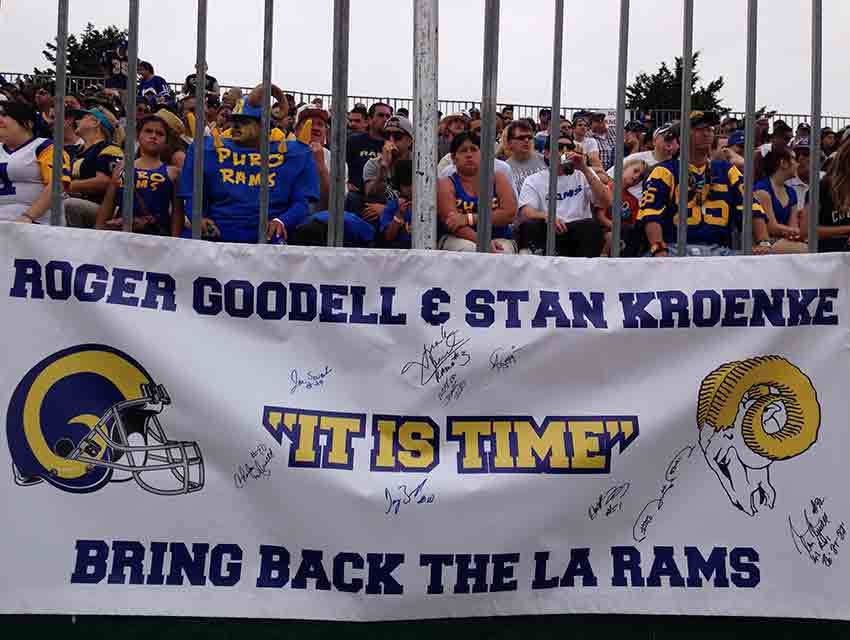 Sitting on a foldup chair at the Dallas Cowboys Training Camp in Oxnard, California, 83-year–old Roosevelt Grier leans upon his cane and shifts his attention between the visiting St. Louis Rams on the field and the Los Angeles Rams fans filling the grandstands.

“It sure feels like they’re back,” said Grier, lifting a cap with his nickname, Rosey, printed on it—as if anyone in attendance needed help recognizing the six-foot-five Hall of Famer.

Nearly 50 years earlier, Grier had stood on a similar field at Cal Lutheran University, just 20 miles west, alongside the Los Angeles Rams’ “Fearsome Foursome” as they faced another Dallas Cowboys team for a scrimmage much like this one. The Rams had recently hired George Allen as their Head Coach after suffering seven consecutive losing seasons. Cowboys Head Coach Tom Landry stood across the field in a freshly pressed suit and trademark pork-pie hat. During a lull between snaps, Grier noticed Landry glaring at Deacon Jones. “Hey, Deak,” he said, “Tommy boy’s lookin’ your direction. Get ready.”

Jones got off the line extra quickly on the next play, bursting into the Cowboy backfield to stop the ball carrier for a huge loss.

That day, described in Jones’ 1996 biography Headslap, seemed to signal the coming of a new era for the Rams. “With the lacy white clouds drifting across the deep blue sky over the rolling green hills of Thousand Oaks,” he wrote, “it was the day scrimmaging started to be fun again.”

In Oxnard, Grier—now a half-century older and significantly spryer (he carried 284 pounds in his playing days) —sensed optimism in the air, much like Jones did at the onset of the George Allen era.

The Rams called Southern California home for 49 years before leaving for St. Louis in 1995. Before the Dodgers and the Lakers, they were Los Angeles’ first championship sports franchise. Whether it was the image of Rams quarterback Bob Waterfield stepping out of a limousine with his wife, Jane Russell, to attend a black-tie affair, or running back Glenn Davis on a Malibu beach with Elizabeth Taylor, or the countless appearances that Rams players made in film and on television (Hell, Rosey Grier even had his own variety show!), the team captured the glitz and glamour of Tinseltown, building a template for the L.A. sports icon that exists to this very day.

It seemed all too fitting to spot Jaime Foxx and former L.A. Dodgers manager Tommy Lasorda on the sidelines of the scrimmages. The visit for the Rams felt so much larger than a visit—it felt like a Hollywood premiere. Inglewood Mayor James T. Butts, Jr. even made a cameo to address widespread speculation that the Rams might be moving back to Los Angeles after the 2015 season, sharing with the media that construction of a stadium on the site of the old Hollywood Park racetrack (land that St. Louis Rams Owner Stan Kroenke purchased in 2013) could begin as early as December.

But despite a quasi-red carpet event that also included a cavalcade of former Los Angeles Rams (“There are as many Rams fans here as Cowboys fans,” marveled Hall of Famer Eric Dickerson in between signing autographs.), the real stars were the estimated 5,000 Rams fans in attendance, boisterous from whistle-to-whistle.

Given the intensity of feeling around the Rams and the recent skirmishes that broke out between Cowboys and Oakland Raiders fans (whose team were also in Oxnard last week for guest scrimmages), there was good reason for security officials to prepare for conflict between the two devoted fan bases. In addition to a prominent showing by Oxnard Police, a contingent of California Highway Patrolmen were on hand to—at the very least—revisit their close connection to Los Angeles Rams mythology.

But little animosity sprang up between Rams and Cowboys fans. And despite the three brawls that broke out between the two teams precipitating an early ending to Tuesday’s scrimmage, the real battle being fought in Oxnard was between Los Angeles Rams fans and cultural amnesia. Whether it was by wearing the royal blue and “California gold” of the team’s old L.A. uniforms, the incredible proliferation of Los Angeles Rams tattoos, and the reverence expressed to the Los Angeles Rams players of yesteryear, it was a battle on behalf of memory—a trait for which Angelenos aren’t exactly renowned. It wasn’t as if these Los Angeles Rams fans weren’t rooting for the St. Louis Rams—it’s that they were doing so because these players are a bridge between their storied Los Angeles team and the one that they believe is set to return.

With the NFL deigning to re-locate two teams to Los Angeles and the St. Louis Rams jockeying with the San Diego Chargers (who briefly played in Los Angeles in 1960) and the Oakland Raiders (who played in the city from 1982 to 1994) for those two spots, groups like Rams World Order, Bring Back the Los Angeles Rams, Ram Central, and SoCal Rams, are all optimistic that history is on their side.

“I am telling you the Rams will once again be called the Los Angeles Rams. I’m not hoping. I know,” proclaimed 37-year-old Rams World Order president Michael Martinez. “I have witnessed them leave … and now I will witness them come back.”

“Sure I’d go back [to a Los Angeles stadium] to watch them play, ” he says of the Rams before remembering the passage of time and adding one thought: “If I could afford the seats.”

Joshua Neuman is a Los Angeles-based writer and the author of the Los Angeles Rams Tumblr Greatest Show on Grass.