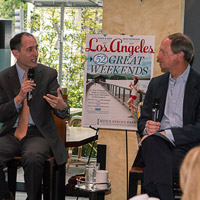 The doors of Kate Mantilini opened early Tuesday for a Los Angeles Magazine Breakfast Conversation between Ben Hecht, the CEO of Living Cities, and John Emerson, the president of private client services for Capital Group, entitled “the future of Los Angeles.”

So what does Los Angeles need to keep its future bright? According to Hecht, whose organization works to support community development corporations across the country, the answer is a combination of private and public funding and a group of local leaders willing to admit what isn’t working and able to work—as a team—to instate systemic change. “If you bring financial services and philanthropy together,” Hecht said, “they figure out how to leverage each other.” That, plus the power of celebrity to endorse social good through non-traditional media (Ashton Kutcher, are you listening?), could affect real change here in L.A., where one big transformative idea could go a long way toward improving the status quo.

The conversation also touched on the power of TV news, digital technology, and how it’s hard—but not impossible—to make change from the bottom up. “Try it here,” said Hecht in response to an idea to recruit talented teachers with an NFL-style draft. “If it works, it will take off. Good ideas have currency they never had before.”