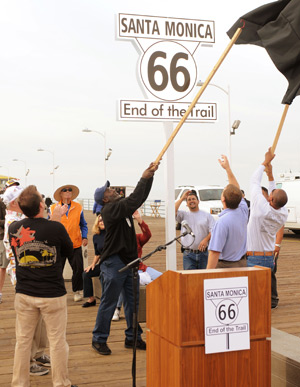 I’ve always thought of Route 66 in terms of its legend and lore: It’s the route the Joad family took before Sal Paradise and Dean Moriarty hit the road; It’s where people drive for kicks.

As of yesterday, it’s also officially where thousands of tourists visiting L.A. experience the Pacific Ocean (and carnival games and rides) every year—and where I start my weekly Sunday morning run. That’s right, after years of debate, the Santa Monica Pier was officially named the western point of Route 66 by the Route 66 Alliance Wednesday morning, the 83rd anniversary of the Route. Civic officials, along with a motorcade of 66 classic cars and motorbikes, marked the occasion by unveiling an “End of the Trail” sign on the Pier’s wood deck. (An unofficial “End of the Trail” sign that overlooked the Pier during the 30s has been lost for decades).

I’ll stop for a minute to check out the sign this Sunday, and then I’ll keep running. After all, isn’t keeping moving what the Route is all about?