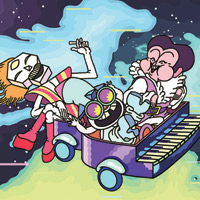 Best remembered as “the dead one from Monty Python” (at least by his fellow Pythoners), Graham Chapman met John Cleese at Cambridge. The two were joined by Terry Jones, Michael Palin, and Terry Gilliam, and well, the rest isn’t history. In 1980, nine years before he died of cancer, Chapman published his absurdist memoir, A Liar’s Autobiography. That book became the source material for a new 3-D animated film (out November 2), which recounts the misadventures of the openly gay, secretly alcoholic comedian in a series of surreal sequences, including some out-of-this-world must-see scenes of late-’70s L.A.