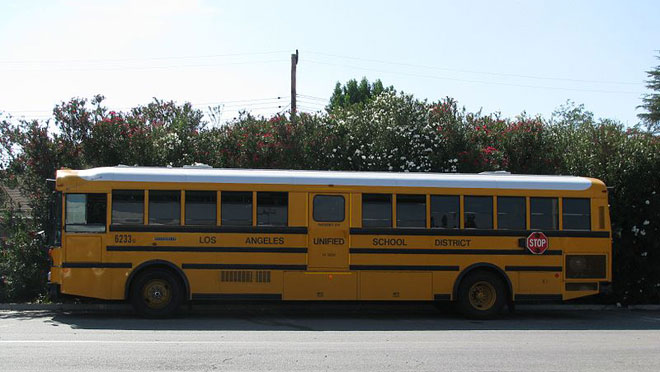 This afternoon, the LAUSD board was supposed to determine the fate of the district’s embattled $1 billion iPad buy—but that agenda item has been shelved in favor of discussing Superintendent John Deasy’s future with the district. While the well-sown rumors of Deasy’s intention to resign have postponed the iPad day of reckoning, few of Deasy’s initiatives shine a brighter light on his vision for the district than his vow to put a tablet in the hands of every student.

As an LAUSD parent, I can only view this vision through the prism of the play structure at Rockdale Elementary in Eagle Rock. When my son entered Rockdale two-and-a-half years ago as a first-grader, half of the play structure was covered in yellow hazard tape. The frog-jumping feature was off limits—one of the lily pads and the pole that went through it had toppled to the ground, the ring attaching them to an overhead beam having cracked off. Nighttime skateboarders who had jumped the school’s fence had made an ugly fissure in the bottom segment of a curved slide. When I went to Rockdale’s administration office to ask why the LAUSD hadn’t repaired the damage, I was told that the school had been submitting requests to the district’s Maintenance and Operations division (M&O) for more than two years, to no avail.

Curious, I contacted the playground equipment manufacturer to see how much those parts might cost. The ring for the frog jump feature turned out to be $7.26; the slide was $285. Voters had passed three multibillion-dollar bond measures that, among other things, were supposed to cover the repair of hazardous and broken play yard equipment at local schools. Even with shipping and tax, the replacement materials for the Rockdale structure came out to $435, but it was $435 the district apparently didn’t have to spare— leaving 283 students to play around the damage for more than two years. (By means of comparison, the district has committed itself to pay at minimum $678 for one iPad.)

Together with another family, my wife and I bought the parts. Having donated the hardware, I thought that M&O personnel would then install them. I was wrong. Due to staffing cuts, I was informed, there would be no crews available for the foreseeable future. I contacted my school board member’s office to complain about the situation, and also to see what could be done about an active gas leak at nearby Monte Vista Elementary, which I had recently heard about. Weeks had gone by since the leak was detected. It had been cordoned off, but M&O hadn’t gotten around to repairing it yet.

Apparently I applied enough pressure, because the next day, an LAUSD repair team came out and fixed Rockdale’s play structure with the parent-bought parts. A supervisor from M&O emailed me to make sure I was satisfied with the work. He also informed me that there had been a series of gas leaks at Monte Vista Elementary, which was built in the 1940s, and that they had been repaired on “a case-by-case basis.” The LAUSD’s response to the latest leak was to cap off the deteriorating line, thereby cutting off heat to several classrooms. Replacement of the school’s entire gas line system was supposed to take place this past summer, but the work wasn’t done. As the weather turns colder, many Monte Vista students are going to have to bundle up if they want to stay warm in class.

One of the most common causes of fires after an earthquake is the rupture of old and corroded gas lines. Addressing earthquake hazards was one of the selling points of those three school bond measures, all of which included the words “Safe Healthy Neighborhood Schools Measure” in their titles. The official text of the initiatives, which stretched on for dozens of pages, devoted a couple of clauses to computers and network upgrades. And yet here, years after the bond measures passed, Monte Vista Elementary’s gas lines, which had failed repeatedly as a matter of course, hadn’t been replaced in their entirety, while the school district is poised to run up $1 billion in debt to purchase iPads.

To what end? While there may be merit to Superintendent John Deasy’s argument for closing the digital divide that keeps the district’s poorest students at a competitive disadvantage, the massive iPad investment does little to close it.

Furnishing every student with an iPad presumes that digital disenfranchisement is mostly a matter of hardware and software. That may have been true a decade ago, but as prices for tablets have plummeted to as little as $100—not iPads of course, but offerings from Apple’s competitors—a high-speed Internet connection has become the main barrier. Although the original iPad plan allowed students to take their devices home with them, many of the district’s poorest students are as likely to remain as disconnected as before because they are children of undocumented immigrants—how easy is it for them to pass a routine credit check for Internet service while lacking proof of taxable income? There are some Internet providers that will forgo a credit check, but these tend to gouge customers, charging several times more than what a middle class family pays for AT&T or Verizon broadband.

The district has touted the three-year warranty Apple has granted for the iPads. (This extended warranty, we are told, figures into a purchase price for the LAUSD iPad that’s a few hundred dollars above retail. It’s hard to understand how Apple, given exclusive rights to cultivate brand loyalty by turning an entire generation of LAUSD elementary students into a captive audience, wouldn’t provide the product for next to nothing.) Even if Apple’s operating system updates don’t render the equipment obsolete after three years, the district is bound to hemorrhage iPads by the thousands through subsequent theft, damage, and loss.

To detractors who ask how the LAUSD can possibly be pouring so much money into Apple product when arts, music, physical education, and other enrichment programs have been decimated, the inevitable answer is that the bond measures restricted funds to new construction and capital improvements. It might be an interpretive stretch to classify an iPad loaded with GarageBand as a capital improvement, but there’s no way an ongoing instructional expense like violin or flute instruction can possibly qualify. Nevertheless, if the district is going to make good on its pledge to protect every student’s absolute right to an iPad, it’s going to have to purchase untold thousands more in perpetuity. In that case, the iPad program too becomes the kind of ongoing expense the bond measures prohibit.

Unfortunately, repairing hazards like broken play structures and corroded gas lines, or replacing trailers that pock so many LAUSD schools with new classrooms, doesn’t carry the kind of cachet than iPads bring—or at least, brought 15 minutes ago, before the fast-paced digital economy came out with something even newer and exciting. Meanwhile, the concrete staircase at Rockdale has begun to crumble. Please resist the impulse to yawn.