A Sunday evening report from Politico, based heavily on reporting that originated at LAMag, details the various quandaries and ethical dilemmas that have emerged and taken root at the Los Angeles Times in the four years since the legacy newspaper was purchased by biotech billionaire Patrick Soon-Shiong, and his daughter, Nika Soon-Shiong, began a blurry relationship with the paper’s newsroom and editorial board.

In the article, “Tensions rise between the LA Times and its billionaire owner,” the trio of bylined reporters—Daniel Lippman, Christopher Cadelago, and Max Tani—open with what LAMag has highlighted throughout 2022 as a glaring breach of editorial standards. In May, 29-year-old Nika Soon-Shiong, the Stanford–educated, Oxford Ph.D candidate, tweeted a screenshot of cub reporter Jeong Park’s weekend news hit regarding WeHo watch snatchers, announcing her displeasure with the Times’ choice of framing. Nika Soon-Shiong, who in her capacity as an appointed member of the West Hollywood Public Safety Commission pushed to defund the city’s police force, tweeted that the paper is more interested in protecting the wealthy than holding the “overcharging…manipulating…lying” sheriff’s department accountable. The broad contours of the conflict expounded upon by Politico first appeared in an April article by Jason McGahan at LAMag.

This is one of the particularly exasperating examples of how Soon-Shiong the younger began to wield influence at Los Angeles’ only major daily newspaper—which before her father swooped in, belonged to a company whose owner had intentionally changed its name to Tronc and was likely about to be stripped for parts by a hedge fund. Yet, before the heiress’s inflammatory tweets and their apparent chilling effect on the newsroom, which was reported in April by LAMag and on Sunday by Politico, Nika Soon-Shiong had possibly further worked her way into influencing the paper’s editorial decision-making—damningly, with the possible swaying of a key political endorsement.

It was on April 20, weeks prior to Nika Soon-Shiong’s aforementioned tweet, that the Los Angeles Times Editorial Board announced its endorsements in the citywide office races ahead of primary voting. These were mostly ho-hum and as expected, aside from the WTF endorsement in the City Controller race of fledgling candidate Kenneth Mejia. The Board touted Mejia’s ability to challenge the status quo and “CPA’s zeal for numbers and data” in the endorsement.

The thing about Mejia is that the candidate, running as a Democrat, is a self-described radical who bankrolled the young activists who verbally attacked Democrat mayoral candidates in a synagogue, has publicly called Democrat President Joe Biden a rapist, and also happens to have ties to none other than left-leaning Nika Soon-Shiong—who openly endorsed Mejia shortly before the Times Board followed suit, as LAMag reported in April.

In Sunday’s feature, Politico adds to this conversation, intentionally including the reaction of Mejia’s chief rival, City Council member Paul Koretz, to the endorsement of the radical CPA who has come under fire for lapses in his own accounting credentials: “People are just scratching their heads about their Editorial Board and how they can come to these decisions. I have never seen an election where the newspaper is the story,” Koretz told the outlet.

The Politico report goes on to discuss several other ugly issues at the Times since the Soon-Shiong family took control. This includes issues with the company’s antiquated publishing technology and other gripes but also Patrick Soon-Shiong’s perceived tactlessness with internal candidates after hiring the highly sought-after Kevin Merida as the paper’s new executive editor. Merida took some time to speak with Politico for the story and assured their reporter that Nika Soon-Shiong has no “say in endorsements” and that “[Patrick Soon-Shiong] has never compelled us to do a single story on any of his interests [and] that decision-making authority resides with me.”

Merida apparently didn’t mention that he physically resides across the street from Patrick Soon-Shiong in a house owned by the biotech magnate. He move into the Brentwood property that’s owned by his new billionaire boss with his wife after he took the top editorial gig and the couple relocated to L.A. This, of course, was another piece of reporting, by Allen Salkin, that exclusively appeared at LAMag (on July 14) and is noted by Politico.

This chapter of the ongoing saga may be concluding soon—or at least the Nika Soon-Shiong subplot, as she’s jumping the pond back to Oxford to complete her Ph.D. in international development, as LAMag reported in August, so may lose interest in L.A. or newsrooms or politics in general. Still, we at home will have the ongoing struggle of the L.A. Times and its new First Family to keep a close eye on—it will no doubt be the L.A. media story to watch; you will certainly read about it here first. 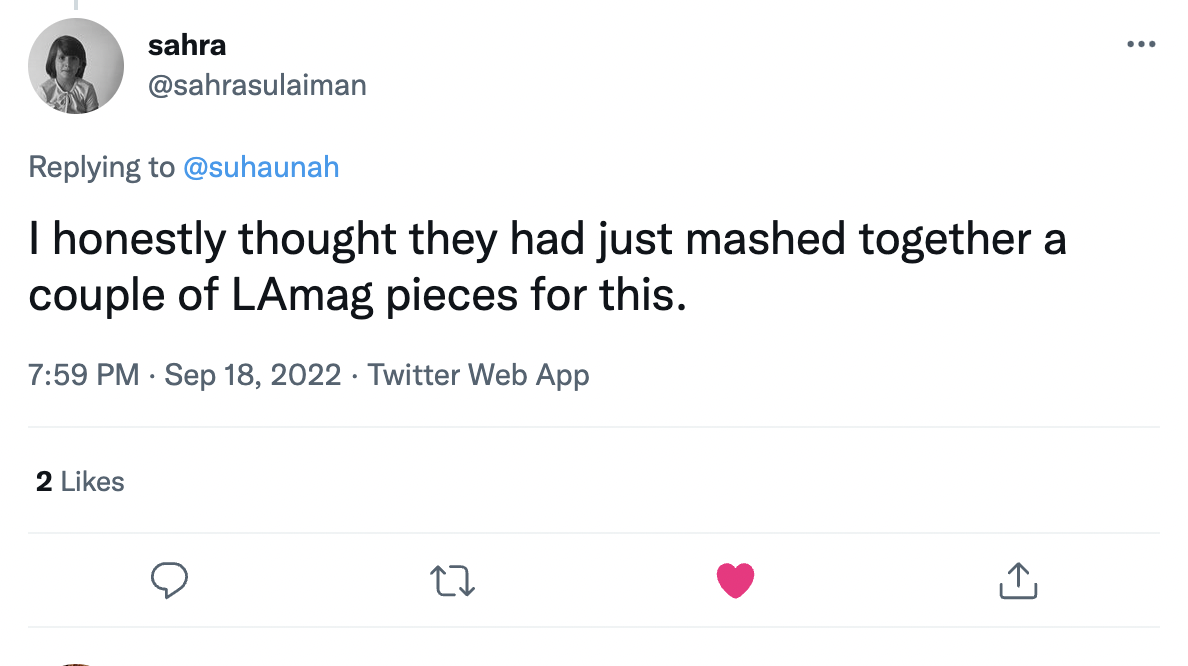 Nika Soon-Shiong is Hopping the Pond

Exclusive: The Battle Over ‘Bad City’