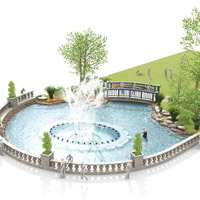 Since 2002, Millions of shoppers have stopped at the Grove’s fountain to take in the musical dancing waters. Fountains as forms of art date to 19th-century Europe, but today’s new wave is largely due to WET in Sun Valley. The company is behind the water-shooting, eye-popping displays at Universal CityWalk, the Americana at Brand, and Bellagio in Las Vegas, among other venues. WET CEO Mark Fuller and his staff share how they turn on the Grove waterworks.

1. The Enclosure
The only things separating the Grove’s 18 million annual visitors from the aquatic spectacle are limestone benches and a balustrade, all quarried in Guadalajara, Mexico.

2. The Landscape
The Grove is dotted with aged trees culled from gardens in the area. The fountain is ringed by a dozen cycads, a hardy species that has thrived since the Permian period and predates dinosaurs.

4. The Fish
More than a dozen koi live in the pond. A bronze sculpture of a child fishing near the water is by the artist Delesprie. It’s part of a larger work, The Lemonade Stand, that depicts Grove developer Rick Caruso’s children.

5. The Plaque
A bronze plaque notes that the design is copyrighted and that there are at least eight patents for the twisting nozzles, water cannons, and robotic manipulators.

6. The Lights
WET manufactures all light fixtures at its Sun Valley factory. In 2012, it introduced the world’s brightest underwater LED lights at a project in Macao. Some installations can have millions of color combinations, but at the Grove the 160 lights are soft white.

7. The Water
The 3,800-square-foot fountain recirculates 50,000 gallons of “swimming pool-quality” water. The maximum depth at the edge of the fountain is 18 inches.

9. The Repairmen
WET employees don rubber waders to perform maintenance inside the pool. The contents are drained every other year.